A Tribute to Our Girl Rudi 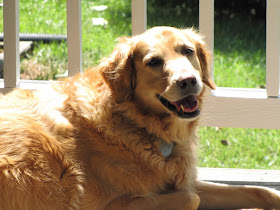 Today was the day I'd been dreading for the last 56 days.  Today I held Rudi one last time, and sent her to the Rainbow Bridge. It was a hard decision, but was one made out of my love for her and compassion...

Rudi came to us from the rescue in September of 2003.  A homeless woman who lived in her car, had seen her in a shelter in North Carolina.   Rules were different at the time, and the shelter released the one year old Golden named Sandy to her. She had been returned to the shelter 3 times for her wild and uncontrollable behavior and was considered 'un-adoptable.'  She was renamed Rudi and in a car full of other dogs, she came to Virginia.  Not knowing her history, I agreed to foster Rudi because I thought that she'd be an easy placement.  She turned out to be anything but that.
There is so much I could say about the first months we spent together.  Rudi was an insecure dog with very high energy and never seemed to be able to focus on anything.  It didn't take long to figure out that others had not been as patient, and had mistreated her.  There were times that I doubted that I would be able to help her find her way or teach her anything.  There were days that I felt pushed to the edge by the seemingly uncontrollable dog that barked all the time who would jump up and nip me in the face.  She was always into everything.  Nothing left on a counter was out of her reach, the cat food was her favorite.  Medications seemed to have the opposite effect on her.  She couldn't be crated alone because she'd break out of them.  When many were telling me to 'give up' I just couldn't.  It was only because in my mind I had a vision of what she could become if given the chance. 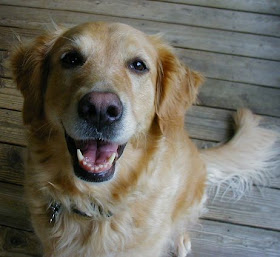 I have no idea when things started to change and come together.  I guess it was me that changed.  I stopped trying to fit her into a mold and just let her be herself.  Rudi had such a big personality, was very bright and was so eager to please.  She was very sensitive and was 'in tune' with my moods.  Rudi was a dog with great character. If dogs have a sense of humor, she had one and she loved to 'show off.'  She could always make me laugh.  When you asked her to do things, she would start barking at you or ramble on in high-pitched short barks like she was questioning you.  She always seemed to have an opinion of anything you did.  Her tail was always wagging and her eyes always sparkled with mischief and she would look at you like she had a secret that she wanted you to guess.
Rudi found mentors in Kasey and Wendy. When Kasey passed a few years ago, Rudi became the top dog in the pack. She took Kasey's place on the bed that first night and never slept anywhere else.  Her passion was the frisbee.  She was wildly crazy about it!!  From the start it was the perfect outlet that allowed her to get rid of all her energy and just be herself. 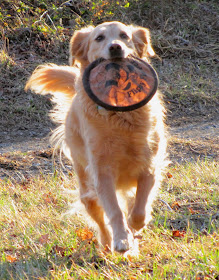 Rudi was more to me than 'just a dog.'  If I had to tell you all the things that she taught me, it would be hard to give you a complete answer.  She made me become a better person and a more understanding and patient dog owner.  To me, she was the essence of friendship, trust and pure unbridled joy and enthusiasm.  Life with Rudi wasn't ordinary, but then Rudi wasn't ordinary.  She was an affectionate dog that was my constant companion for 8 years.  I am going to miss her more than I've ever missed any dog.  Walks won't be the same.  Games of frisbee won't be as much fun.  Mealtimes will be quieter.  Life will be quieter. 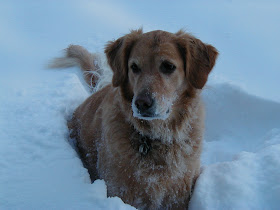 God speed 'my little fruitcake.'  You will have quite a welcome when you reach the Rainbow Bridge...Waiting for you there are a three Goldens, Tod, Ben and Cougar that left us before you came.  But Kasey will be there and I know she'll be happy to see you.  Also there are Scout, Tosh, Tucker, Logan, Cubby, Cowboy, Maguire, Tanner, and Hamlet.  Give them our message and know that we look forward to the day when we'll see you all again.  I just hope there will be a frisbee there too. 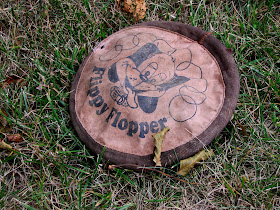