Hopper and Bean left us on Monday for their new foster home. I really hope it is going well for them. I liked them both very much, especially Hopper - despite that Hopper thought the cats would make a good play toy, (or worse) they were both nice girls.

With an empty dog bed, we were all set to welcome a 12 year old Golden from a local shelter. But he ended up getting adopted with his younger counterpart. I hope it's a good thing. But I'll admit that I was a little disappointed. But just after I read about one boy not coming to us, my next e-mail was from Lab Rescue asking me to foster a 14 year old chocolate lab named Hershey.
Of course I agreed, and on Wednesday morning, via a transport from Maryland, Hershey arrived at my office.
I can only speculate on Hershey's past. I only know that he was given up by his owner who had recently come here from Omaha Nebraska.
I do know that Hershey is a nice boy. He is getting along just fine with our crew.  But he's understandably a bit out of sorts and he has done a lot of pacing and panting, that has unsettled our dogs just a little. Added to that, believe it or not, Hershey won't leave the cats alone. I'm not sure if he's just curious about them, or if he really wants to harass them. Time will tell. And time and a chance to get settled in is what we'll of course give Hershey.

Well, you all knew that it wouldn't be long before we welcomed a new arrival or two.  On Wednesday, that's just what we did. We welcomed a pair of girls, Hopper who is 10 years old, and Bean who is the respectable age of 14. This is the pair I was asked to take last week, and declined.  I was asked again on Tuesday since Bean is having some health issues, because of that, and feeling a bit recharged, I agreed to take them.
These girls come to us from North Carolina. In September their owner took them to a kennel for boarding, and never returned. After due diligence by the kennel, the two were considered legally abandoned and Hopper and Bean were turned over to Lab Rescue.

They are nice girls, and have gotten along pretty well with our crew. 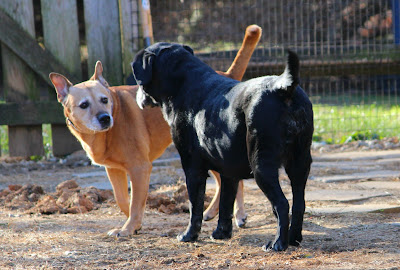 Unfortunately after a couple of too-close-encounters with the cats, and their behavior when they're around, it's easy to see that the two have a very high prey drive that can't be curbed. Of course, I don't want our cats to get hurt (or worse) so I've asked for Hopper and Bean to be moved to another foster home.

Since they have been in boarding since September, and with Bean not feeling so well, I don't want them to have to return to a kennel. And since I'm feeling relatively confident that we can keep the cats safe, we've agreed to keep them until a new foster home can be identified.
I'm glad that we have the chance to get to know Hopper and Bean. Aside from their prey drive, I like them very much. Hopper, is what I think may be a Lab mix. She's very smart, does as she's asked, and is alert to everything happening around her. She was a bit reserved and tentative at first. But today she's much more relaxed and follows me everywhere. Hopper was so happy to have room to run in our big fenced yard. This is another reason why I've agreed to keep them instead of returning them to boarding. 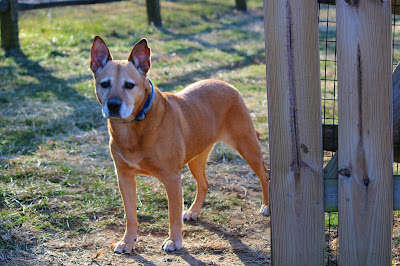 On the flip side is Bean. At 14 years old, as I've already said, she's not feeling well, and she's having problems getting up and around. She also loved the chance to be outside soaking up some sun. She sat in the grass for a long time and sniffed the air. She is a patient and gentle old soul, who enjoys attention. I hope being in a home, on a warm bed, and some one-on-one personal care, she'll start to feel better before she and Hopper leave us to begin the next chapter of their lives.

It has of course been a quiet weekend at our house as I've let the dust settle from the departure of the Barkalot Brothers. The schedule that we were keeping to make sure Abe got fed and his insulin on time is now out the window. On Friday morning, I got up, let the dogs out and back in, and went back to bed and slept until nearly 10 o'clock. Totally unheard of for me. The dogs slept too, so maybe the peace and quiet was needed for them as well. 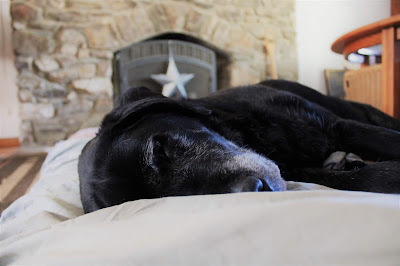 When breakfast finally did come, Todd was outside barking at the deer (or something) at the far side of the yard, and my calling and trying to bribe him couldn't convince him to come inside. He had brunch around noon. None of the dogs seemed to notice the time. 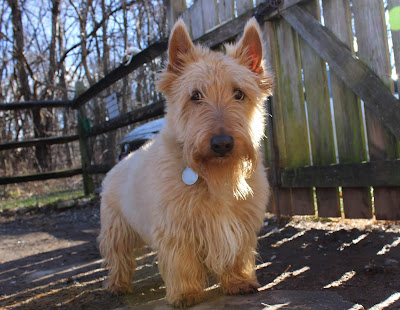 On Friday I was asked by Lab Rescue to take another pair. This time a pair of senior girls whose owner left them at a kennel and never came back for them. Of course I want to help them, but at that very moment, I just didn't feel like I was up to it.

But I was up to taking a few fun pictures of the dogs eating some of Charlie's food mix off the spatula.

I hope you had a relaxing weekend too!

On Thursday, Abe and George, or the Barkalot Brothers returned to the person who loved them first - Their original owner, Paul.

I was pretty sure that I didn't want to be the one to return the Barkalot Brothers to Paul. But the cosmos had something else in mind because I was asked to do it. Despite my feelings, I knew I needed and should see this through and make sure for myself that Abe and George's return to Paul was the right decision.

I spoke with Paul the evening before and he was quite emotional about Abe and George coming home. He was really missing them. He said he felt right away that it was a mistake to give into the pressure by his family to give them up. But he felt he had no choice. Paul told me about what the two meant to he and his wife who as you may remember, passed away 2 years ago. And I'll confess to being curious about her afterwards and looked up her obituary online.  Abe and George were mentioned in it. 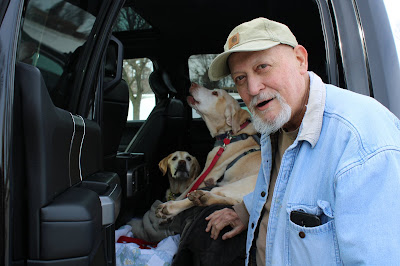 George remembered Paul right away and whined and cried. He was not the only one. I could tell Paul's brother who'd come with him, felt the emotions in that moment too. Abe was a little bit aloof at first. I think it may have been because of his blindness, but after a minute or two, it was obvious he remembered Paul. Both dogs remembered how to get into his truck and with that, they were ready to go home!

Paul called me last evening to thank me (and the rescue) again for caring for George and Abe. He told me that they'd settled in and were sleeping in their old spots. I know it's how it should be and all is right in their world. And it's eerily quiet in ours. 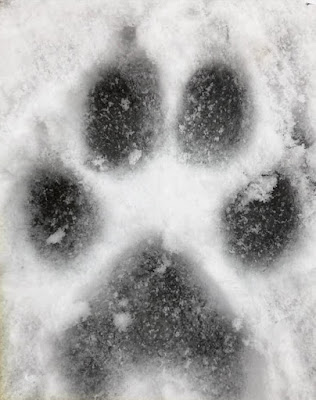