We woke up this morning to the coldest December morning in almost a decade, and we are bracing for what promises to be the chilliest stretch of winter in two years. The word "polar vortex" is being heard in the newscasts and snow is forecast for the weekend.

It's hard to tell if Todd is cold or not. With temperatures below freezing, I think he has to be. So I put his winter coat on him because he really likes being outdoors. 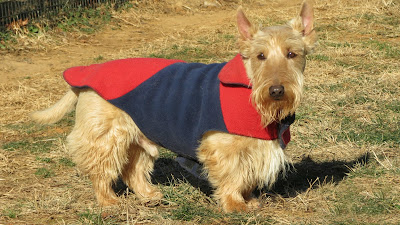 I think he just doesn't want to miss barking at the deer wandering through our yard. 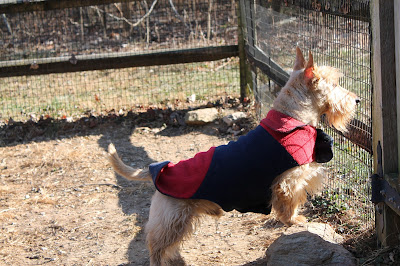 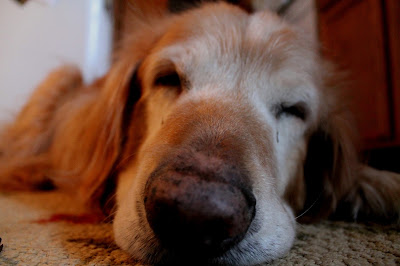 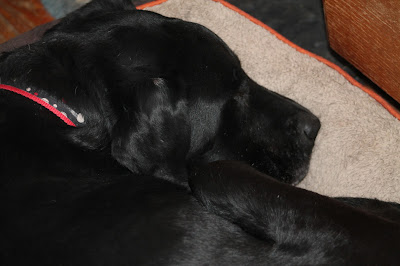 And Max, are happy inside with me. 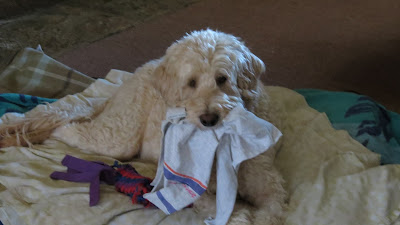 Or maybe it was just the chicken-soup simmering on the stove that kept them nearby. 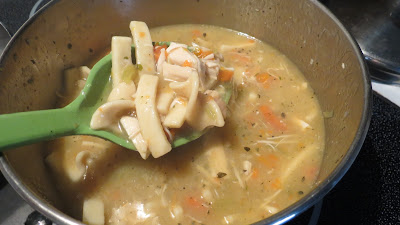 Whatever it was, it was a good, quiet and maybe even a little boring day at home with the dogs.


**And "Tammy" you asked about Charlie in my last post, so these photos taken today are for you.  At about 13 years old now, Charlie is doing well.  His non-shedding "double coat" that is grown out a bit right now means he doesn't worry about getting cold. In fact, I think like Todd, he loves being out in it. 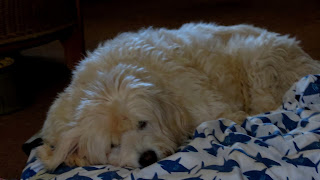 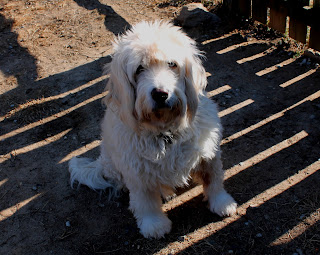 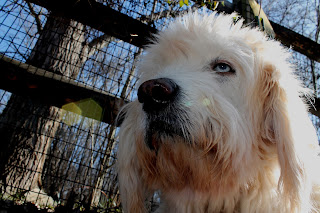 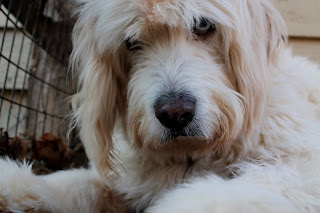 Where Will the Week Go?

The day after Christmas. There are a number of things I didn't get done as I'd hoped. At the top of my list was my Christmas cards. I debated about whether to just save them for next year.  But I really enjoy sending them, so I decided to go ahead and write them out - Better late than well, you know.
On the home front, there was a new worry. Our boy Sunny was not feeling well last week. 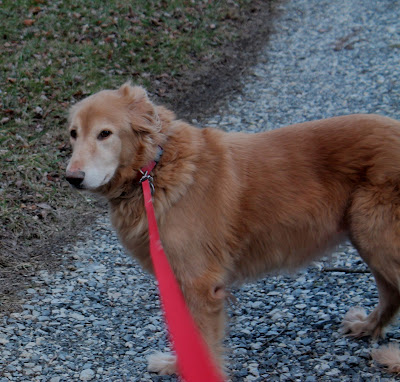 It began when he was reluctant to get to his feet.  He has been struggling to get up the 3 outside steps and has needed a boost to get onto the porch and inside. I gave him a pain medication to help with any discomfort. But instead of feeling better, Sunny only seemed worse the next morning and had a bit of a cough. I upped the pain medication and added another to help with inflammation. But by Thursday night he'd developed a huge (!!) hotspot on his hip made worse by the harness I'd put on him. Sunny still wouldn't get up without help, and the cough seemed worse.

Thursday was a long night as I was awake most of it listening to Sunny's breathing and feeling extremely worried and guilty that I'd not contacted the vet. Mobile vet came on Friday making me feel better by saying that I was on the right track as far as how I was caring for Sunny. He added a couple of other medications to help get rid of the congestion and heal the hotspot.  As this week starts, don't let the photo below fool you, our camera shy Sunny is much brighter. He is getting up by himself, the cough has almost disappeared and his appetite is returning. 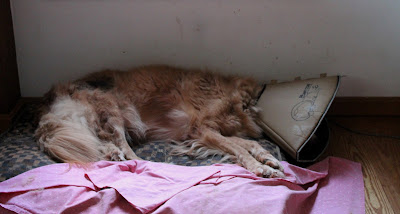 I am hopeful it'll be a quiet week when I return to work on Wednesday. But Eva's paws say something else.  She was left outside a little too long with Todd, and is hard at work digging to Australia - I think she may have other plans about where the week is going. 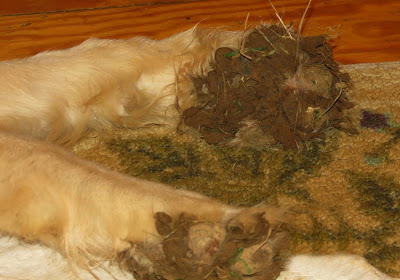 Todd, who had mud on his nose, certainly does! 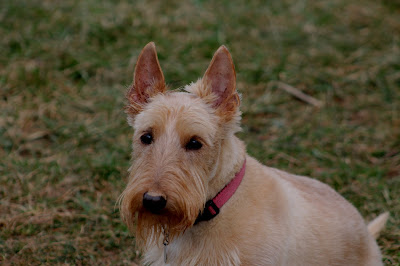 All we can do is be like Jake (below) and see where it take us!

Well, ready or not, Christmas day is here! Last week came and went much too quickly as we had yet  another sick dog, Sunny.  He is a bit better, and I'll post about him tomorrow.

Today it's about Christmas.  Our day has already begun with an early walk outdoors. We have high winds and as it blows through the trees, the dogs stand with their noses held high in the cold brisk air taking in what only they can smell.
Back inside the quiet of the morning returns as the dogs settle back in. 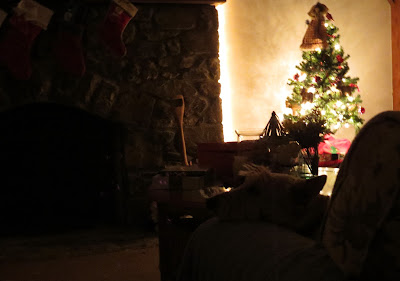 As I put the presents for Carl and my brother around the tree, the anticipation of what is to come filled my senses. 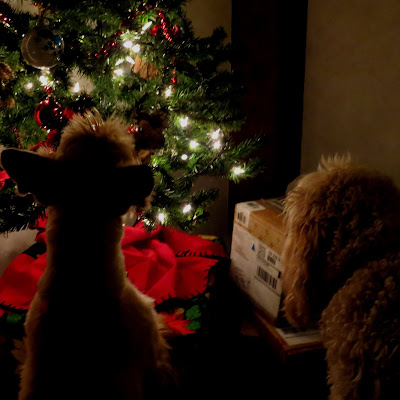 My heart opens wide and happiness, and hope and humbled gratitude have filled my quiet space. The call for “peace on earth, good will to all men” wraps itself warmly around me. 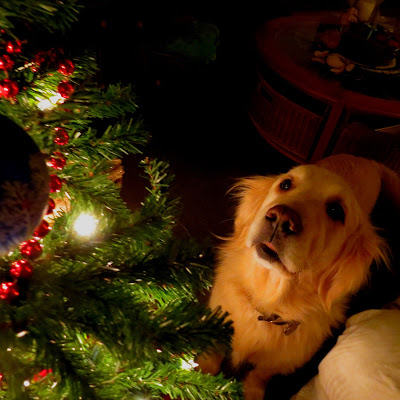 Christmas has come. Warmest wishes to you, thoughtful friends, from all of us at Golden Pines! 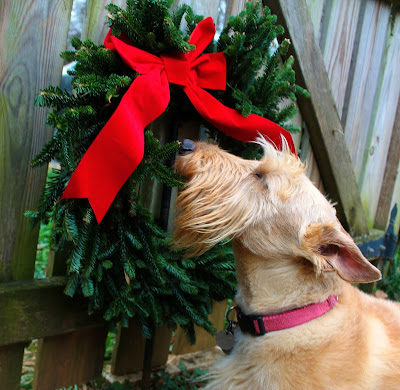 It has been just over a week since Georgie left us, and Monday will of course mark a week since we said good-bye to sweet Millie.  While this heartbroken soul is still trying to make sense of it all, I want to express my sincerest gratitude to you all. It has not been easy.  But your kind words have comforted me, and have helped ease the ache of the two losses that came much too soon and much too close together.  But I know that I am better for having had Millie and Georgie in our lives. 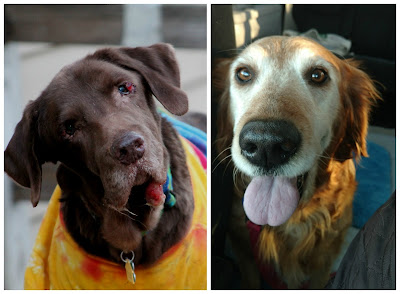 But like it or not, and ready or not, life continued on last week.  It was back to work on Tuesday which meant sitting in commuter traffic. 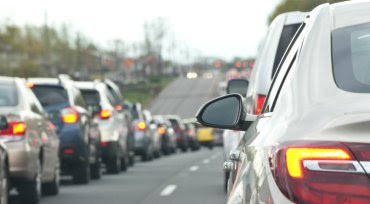 For Todd, it's back to barking at what's on the other side of the fence. 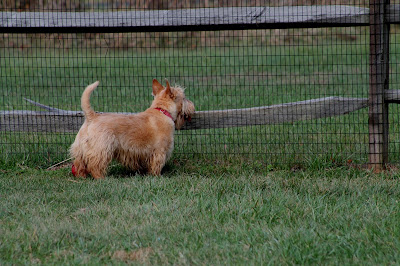 For Rhett and the others, yesterday it meant hanging out.... 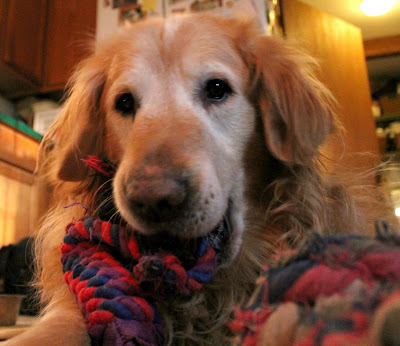 with the girl that comes to our house and trims their nails for me. They really love her and especially love the treats she showers on them. 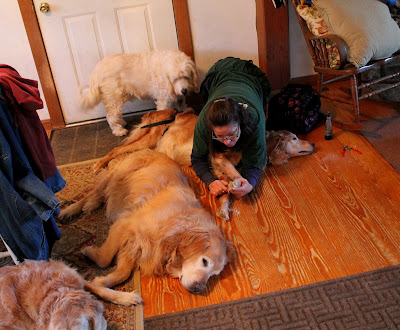 Aside from work, I've got a lot of holiday catching up to do. No cards have been written, not a single package mailed, and I've not even made reservations for dinner for Christmas Eve. However, after a little shopping yesterday, I'm feeling a little Christmas mojo which is just what I need. 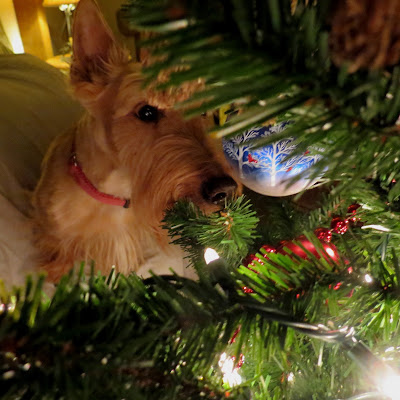 An Unexpected Good-Bye to Millie

After losing Georgie on Friday, yesterday brought an unexpected loss of Millie.  She began bleeding pretty heavily on Friday night, from one of two internal tumors on her bottom. Even though the bleeding stopped off and on through the weekend, tests yesterday gave us no options. And so after a short 20 days with us, I said good-bye to sweet Millie. 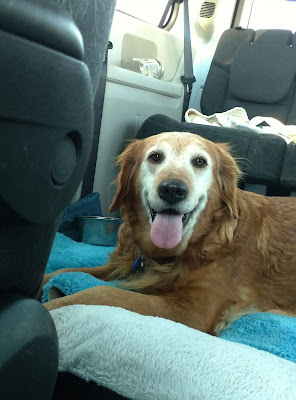 There are no words to articulate how heartbroken I am at this moment. Last night was a sleepless night as I played the conversations, the events and the "I should have done this" over and over in my mind.  However, I know that none would have changed the end result, and what the tests and diagnosis were. 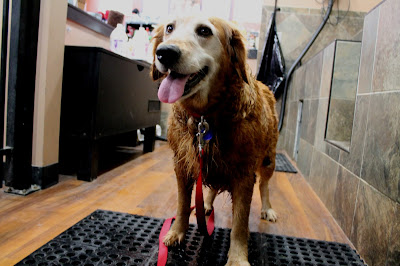 The   Irving Townsend quote once again seems so appropriate.


"We who choose to surround ourselves with lives even more temporary than our own, live within a fragile circle, easily and often breached. Unable to accept its awful gaps, we still would live no other way. We cherish memory as the only certain immortality, never fully understanding the necessary plan."

Even though I am truly broken, last night as I was trying to sleep, and Todd, Charlie, Rhett and Max,Sunny and Ms. Yellow slept with me in the guest room, deep within my soul, I know I can live no other way. I have no regrets. Only humble gratitude in my broken heart to the rescue for their friendship, kindness and compassion and who provided the best care for Millie and gave me the chance to know and love this "lost girl." 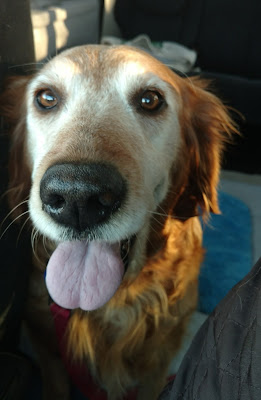 God-speed Millie. For a little dog, you have left a big hole in my heart. Your candle along with Georgie's is lit to help you find your way to the Rainbow Bridge. And I look forward to the day when I'll get to see you again. 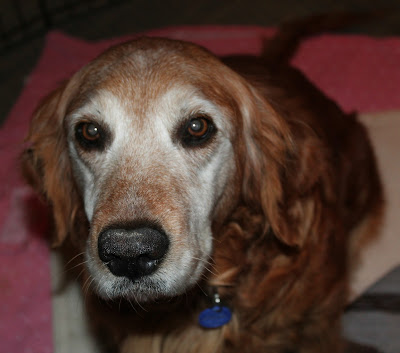 A Sad Good-Bye to Georgie

Hello Blogging Friends!  It has been two weeks since I last posted, and I've missed you all and being able to blog.  But in between sick dogs, work, trips to the vet, work, (did I say that?), the holiday getting into full swing, it has left little time for blogging.

But today as we are watching our first snow fall... 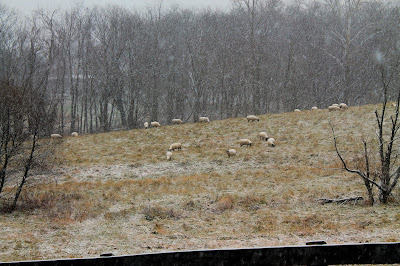 I am also mourning yesterdays loss of Georgie. Despite knowing in July when Georgie came to us as a "hospice foster" that this day was coming, it didn't make it any easier when it did.
I suppose that I always held onto the hope that the vets were wrong, and we'd be given more time than just 5 short months. The visible signs of the cancer were every where on his body (which is why he wore a shirt) and he had become paper-thin.
George was still involved in the daily comings and goings and followed me every where I went.  He had a voracious appetite, and still loved playing ball.  This all made the decision to let him go, that much more difficult and that much sadder.
George was truly a dog that was full of heart and courage. But I knew this week when the cancer became visible around his eyes, and he was having trouble seeing, that it was his time. So, yesterday as I held his beautiful face in my hands, I told him all those things that come from the heart at those times, including that sadly, his journey and his battle that was so hard fought, was over. It was time for me to let go. It was time for him to leave us. It was time for him to rest. He quietly left this world for the next.
God speed to another lost boy who found his way as a stray from a shelter in Charleston West Virginia over 250 miles away to Lab Rescue, and then to us.  I have no regrets other than the feeling of being "cheated" out of never being able to see Georgie as a healthy and vibrant Chocolate Lab - Which is why I look forward to seeing him that way when we meet again one day at the Rainbow Bridge.

Finally, thank-you all for stopping by and for sharing in the loss of Georgie.  I hope you'll bear with me as I regain my footing from all that has been happening on the home-front and mourn this loss.  I am down, but not out - So, until I regain that momentum, and to end on a positive note, here's a photo of Todd taken after a trip to the groomers on Thursday. What would I do without this character? 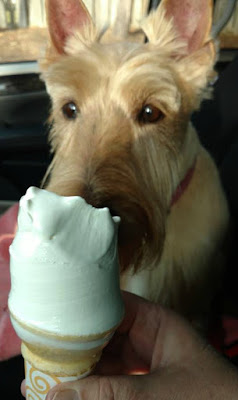