"A Lab Rescue volunteer told her husband that she wants all the senior dogs adopted for Christmas. So, he decided to pledge on her behalf to cover the adoption fees for all of the dogs age 9 and older from now until the end of the year."

What a generous donation to the rescue! It has of course, created a lot of buzz. And for our foster girl, Nina, there ended up being no shortage of interest in her. By Thursday I had 4 phone calls, and by the end of the week, Nina had met her perfect match! Joanne is retired, recently widowed, and she lost her previous Lab about 6 months ago. I liked her right away. She is compassionate, and caring and she and Nina are perfect for one another.
Joanne loves senior dogs. She cried when she met Nina and felt a connection to her instantly. I have no doubt that they should be together.

You know our dog beds never get cold. So, our year is ending with the arrival of Ginger at Golden Pines! Ginger will turn that respectable age of 13 in May. She was given up by her owner who simply no longer wanted her. He even threatened to take Ginger to a shelter (or worse) if Lab Rescue didn't accept her.
Ginger was so happy to be out of boarding, and was anxious to get into my van to start the next chapter in her life. Her tail has not stopped wagging! Intros that are always taken really slow have gone well. Our dogs like Ginger just fine!
Ginger is a typical Lab. Easy going, happy, and eager to be friends. If we're having any problems, it's that Ginger is constantly pacing and panting and won't settle down inside. Given that her world has been totally turned upside down, it's understandable. I know when she realizes that she's going to be okay, and finds her place she'll be just fine. 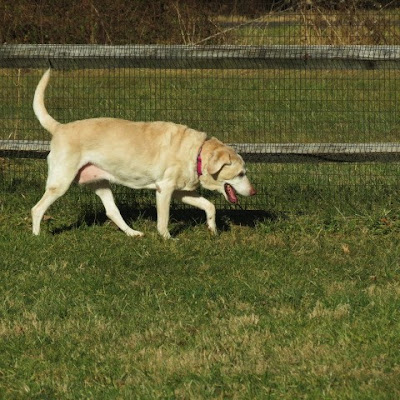 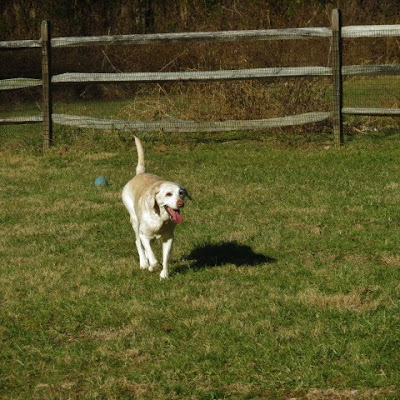 Onward to the New Year!

Wow, it has been way too many days since I posted! And I could ask that age old question, "where has the time gone?"  Usually I don't know the answer to that, but this time I do. Because, believe me, even without Christmas, there has been plenty going on at our house. 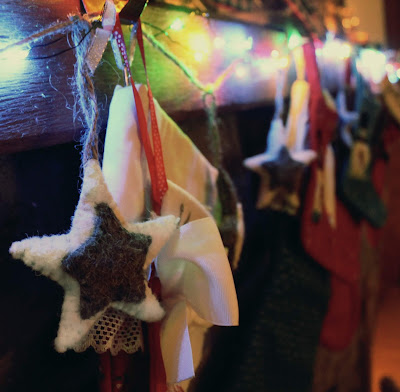 It didn't help that I was sick for about a week, missing work, and staying in bed one weekend helped to put me behind on almost everything. A cough is still hanging on, but I'm recovered from the bug that also knocked down half of my co-workers, and my husband and brother too.
Back on my feet, I got almost all that I needed done just before the holidays. And during that time Alf had his dental surgery. Six teeth were removed including a canine that exposed his sinus. Alf has fully recovered, and is back to eating normally and barking at me when I am not getting his dinner to him quick enough.
Sunny has had a bout of what is either canine vestibular syndrome, or an inner ear infection. We don't know which. He's unable to fully keep his balance when he walks, and we've started him on an antibiotic. He's much better, but of course I'm worried about him.
Then of course there's Bailey. She is having mostly good days right now. We had a visit to Holistic Vet and she's given Bailey a Chinese herb that we hope will help her digestion and keep the acid in her tummy to a minimum.
I'll now just fast forward past some of the other things that have happened, like the opossum inside our garage that got caught halfway inside a plastic bag the other night and couldn't free itself. And how a couple of the dogs are growling at the rocking chair that has been sitting in the same place since we moved here. Is it a ghost of Christmas past?
Whatever it is, we do know that the end of the year now in sight. And after a week off work, I'm filling in on Friday for my counterpart who wants to spend time with her family. So with that, it's onward to the New Year! 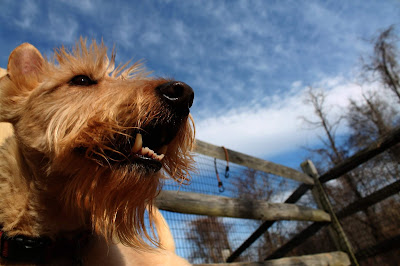 Thank-you, friends, for stopping by! I do hope all is well with you!
Posted by ~Kim at Golden Pines~ at 5:31 PM 20 comments:

Days of Grace and Goals for Bailey

The end of another week, as Christmas draws closer.

This week ended with Bailey back at the Internist for x-rays and an ultrasound in hopes of finding the cause for her cough and all the problems that it brings about for her.

Unfortunately, the Internist "identified a 3.9 cm mass deep in the abdomen that is likely pressing on her esophagus."  This mass is expected to grow and will eventually cause discomfort or blockage. This mass in particular, because of where it is, is totally inoperable. Even if Bailey were a younger dog, the Internist does not feel that removing it would be an option.  And if that weren't enough (and it was) also found was another mass between Bailey's ribs.
Given all of that, and at the recommendation of the Vet, I've discussed everything with the medical-coordinator from the rescue and together we have decided to make and keep Bailey happy and comfortable but not pursue any further treatment for her. She will of course have any needed medications and vet care, but there will be no "extreme measures" taken to prolong her life.

So, as we begin Bailey's precious days of grace, I will do as I always do.....  To really (really) try to not dwell on what's to come. And if I have learned anything about this kind of diagnosis, I know to just forget what the vet says and remember to live in and savor the moments together. It also helps to think and remain positive and set goals and do our best to reach them. Bailey is feeling well, she is not coughing, she has a really good appetite, and is up and around. She is happy.  So, for our first goal it will be an easy one, Christmas and onto New Years.  The big goal will be her 14th birthday that comes in March. I think with your cheering her on, and POTP, we will make it together.

Our weather this weekend has been foggy, with watery splatters, thin drizzle, drizzle strengthening to steady rain, with a low ceiling of clouds, chased by cold damp temperatures. What dreary weather. 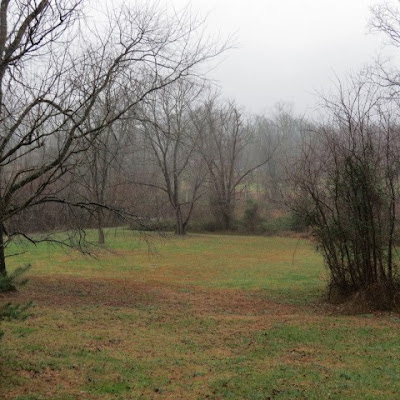 Seeing Todd sitting outside, all by himself this morning in the rain, fog and cold, reminded me of the origin of the Scottish Terrier and the description written by the Westminster Kennel Club, that perfectly describes them.


"The Scottish Terrier’s character and personality reflect the bleak and lonely moors of his origin. Life to him is serious, to be met with dignity, reserve and stout heart. He is by nature aloof, but to the accepted few friends and family his devotion is deep and lifelong. A secure place in his home, understanding and companionship are essential to his happiness. In spite of his independent spirit, his strong desire for approval will win compliance with your wishes where harsh words and punishment will fail. To those who appreciate his unique character, the Scottish Terrier is a friend and companion, second to none." 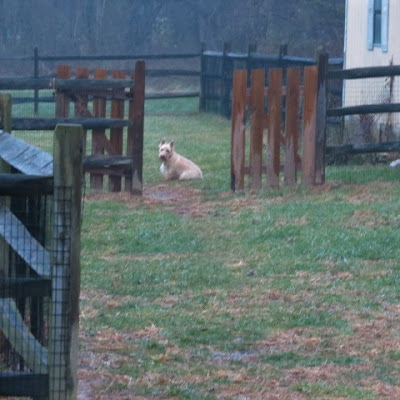 I hope you're having a good weekend!

With my work week now only being 3 days, they seem to fly even quicker.  Now I get everything done on Wednesday, instead of Friday, so I can be a "stay-at-home-dog-mom" by Thursday.
This Thursday I took Alf to the vet.  He is all healed from his first surgery so it's time to move onto the next treatment that he needs.  Dental work. He has at least 3 teeth that will need to be extracted, and of course they'll need to be cleaned too. After the console, I had no real plans for the rest of the day.
So, I decided to take a small road trip. The vet that I'd taken Alf to was in the same direction as a parcel of property that is for sale in the neighboring county. The land and its location really caught my eye, so much so, that I contacted our realtor about it.
I was about an hour from home, and knowing I needed gas I decided to wait because gas in this neighboring county is almost 50 cents less per gallon.  My thriftiness became my downfall because when I got to the gas station, I suddenly realized in my rush to get Alf to his appointment, I'd forgotten my wallet. I had no money, no credit card, no ID, nothing.  And, my gas tank was almost on empty. I scrounged through everything and came up with $2.60ish in loose change. It would buy enough gas to get me pretty close to home,
But I knew once I was closer to home I could count on my friends to help me if I needed them. So, I went in to buy the gas, and explained why I was buying so little with change. Before I realized it, a man behind me in line said he'd give me a couple extra dollars that he had, and another man behind him did the same, even offering to fill my tank. (I thanked him, but said I only wanted to get home).  Between the two men in line, and I can't be sure, but maybe even the lady behind the counter, I ended up with $10 for gas. More than enough. I do not think I could not have been more thankful for their kindness. Alf also thanked them with tail wags and we were soon on our way home.
I thought about going to see the property. But decided against it. It'll have to wait for another day. When I have more gas and my wallet. 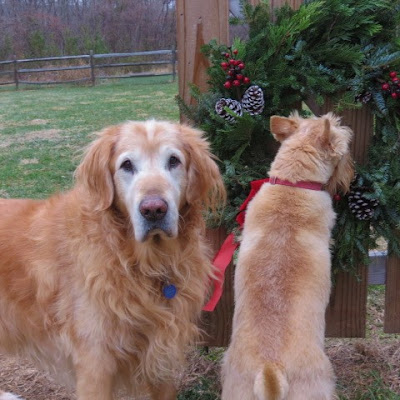