Thank-you all for your blogging-welcome to Sadie! What a nice, nice dog she is!! Sadie has fit right in and is getting along really well with our dogs and the cats too!  Being the 900th dog for Lab Rescue has meant that Sadie's story of rescue has been shared by them, so I am sharing that and a couple of their photos with you.

Story as told by Lab Rescue:  Sadie's story before coming to Lab Rescue is a sad one. She originally belonged to an older woman who could no longer care for her, so she gave her to her daughter. Eventually, the daughter decided she could also not care for Sadie and gave her away to a couple. Sadie repeatedly escaped from the couple’s yard, and they eventually stopped going after her.

When she escaped, Sadie would wander down to the police station nearby as the police officers would share their chicken biscuits with her. Eventually, the officers told her owners to sign her over since they weren’t caring for her. The officers brought Sadie to the local shelter in North Carolina. Sadie was in very rough shape with a cantaloupe-sized tumor on her side and a small one in her mouth.

The shelter asked if Lab Rescue could help, and we immediately said, “yes!”  Sadie’s transporter described Sadie as a “dreamboat of a dog” as she never stops smiling and wagging her tail. The Rescue quickly arranged for Sadie to get the veterinary care she needed, and she is now recovering from her surgery. We don’t have the final reports back on her biopsy, but no matter what, she will be safe and loved from now on!"

This is quite the sad story, isn't it?  The sharing of Sadie's story has also meant that there are hopeful adopters that want to meet her. I got an e-mail late Friday night from a coordinator that had someone that wanted to come Saturday morning.  For several reasons, I wouldn't let them come this weekend. One reason that may seem and probably is totally selfish, is that I really want this time to get to know Sadie, and let her settle in just a bit before she moves on to the next chapter of her life. 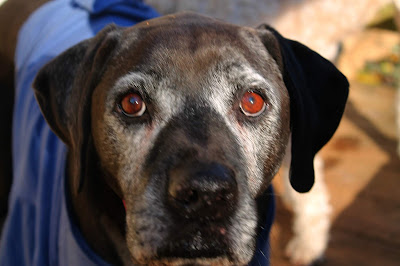 I did agree to let someone come on Thursday. Which means she may be leaving us. I'll be totally honest and admit that I am regretting that. But in my heart, I know that I am just the gateway to  help and keep dogs like Sadie safe and to get them to where they are supposed to be. But you know me, and you know it's not always easy for me to let them go. 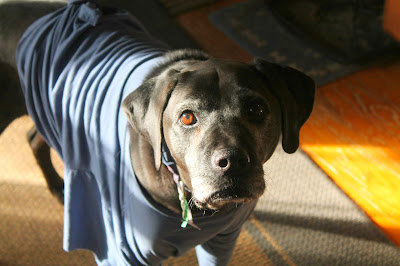