Would you like to see what "highway robbery" looks like in Loudoun County Virginia? Well, here it is. Doesn't it look so innocent? Well don't be fooled. Under the country exterior of this farmers market there is a crime being committed... 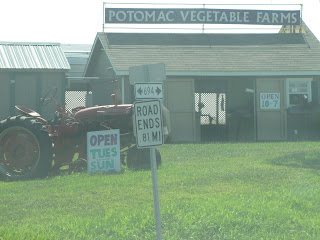 Let me tell you how I uncovered this little local scandal that is happening right under the nose of all of us who pass by this stand every day...It all started with my buying produce from a farmer down the road from us. His prices were very reasonable; under a dollar (.75 cents) a pound for vegetables. I've enjoyed stopping by there the last several weeks buying whatever they had, squash, green beans, cucumbers and tomatoes. It's all done on the honor system. You go inside this little shed (below) and pick out what you want. There was a scale, you weigh what you have, and put your money in an old cookie tin. A lot of times I left more money than I spent. One day I was so appreciative of the beautiful produce that I left a note thanking them...Corny I know, but I was just so grateful to find a good place to buy fresh veggies. 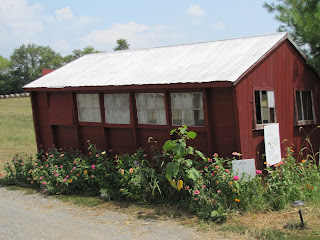 I even bought free range eggs, that were really pretty--Most were brown, some were kind of green in color. But I could tell the garden was about "done" when the counters that were once full of fresh produce and eggs were looking a bit bare. 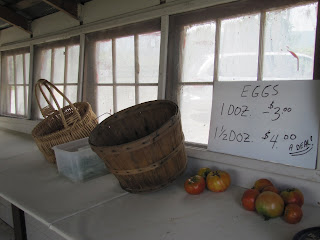 I really wanted some fresh tomatoes so I decided to stop at the place whose picture is at the start of this post. I was stunned at the prices. The tomatoes were $3.50 a pound (£2.27) cucumbers were $2 each (£1.29) and a dozen of the free-range eggs were $5 a dozen (£3.24) and don't get me started about how much the apples and cantaloupes were!! Those prices are nearly doubled than the ones at "the fine grocery store (that I love) known as Wegmans" and I left the little roadside market with my bag clutched tight and a new commitment to have my own garden next year!

I really want to support the local growers and farmers, and I know I shouldn't complain. I know it's hard work to grow a garden--But am I the only one who thinks those prices may be a little steep??
Posted by ~Kim at Golden Pines~ at 5:50 AM