Serendipity is defined as "finding something good without looking for it." My belief in to being open to this very thing was reinforced last Sunday when I attended an adoption day for Lab Rescue.

I will start by saying, I never go to the adoption days that the rescue has. This is simply because they're on Sunday, and I often teach at church, so I have never attended. But for whatever reason,  I decided to go to the one held this month and take our foster boy Hershey. 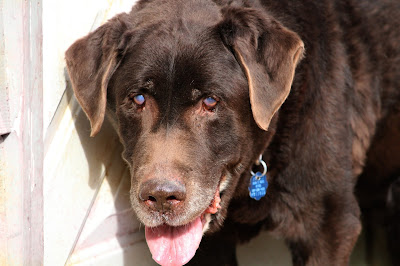 I didn't really think he'd get adopted, and I'll admit to only going through the motions in getting everything together for him. But the cosmos and serendipity had other plans. Because I had just gotten out of my van, when a couple walked up to me and asked if I had Hershey. They told me they had come specifically to meet and adopt him. After my shock and surprise wore off, and okay, I'll admit some hesitation too, I knew after chatting with them for several minutes, they were perfect for Hershey. They are both retired teachers that only want to spoil and pamper a senior dog for whatever time they have left. How could I say no to that?

I spoke to both "K&L" this afternoon, and the report of how Hershey is settling in could not be more glowing and they could not be more smitten with him. They've bought him a new orthopedic bed (even though he sleeps on theirs) and new toys too. There is no doubt, he is being totally spoiled and pampered and could not be in a home with a nicer new family all his very own.
It's all been a reminder to me about the good things that happen when you're not looking for them. It's what serendipity is, and I am a believer. 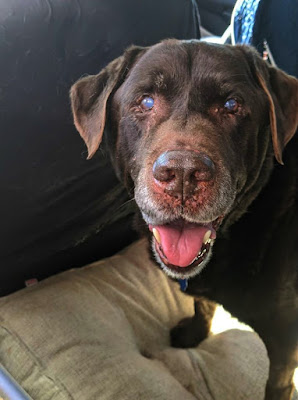 Congratulations to Hershey!
Posted by ~Kim at Golden Pines~ at 11:48 PM