Happy Valentine's Day and Happy Friday!
Our newest Valentine, Hannah is settling in really nicely.  She has a bit of separation anxiety, but it's lessening as each day passes as she gets used to the routine and her new life. 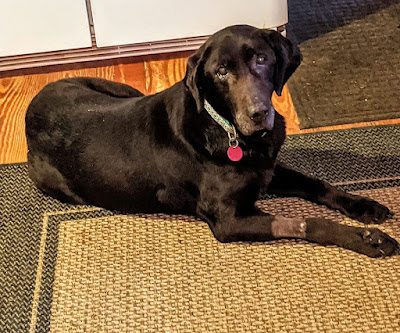 Two other Valentines, Charlie and Sophie went to see the Holistic Vet on Thursday for checkups. Charlie got a good report and we're staying the course. And for Sophie, it was something new. I'm can't remember what exactly Holistic Vet called it, so I will just call it "tuning fork therapy" and it was done to give some relief from Sophie's laryngeal paralysis. Its been used on people for quite some time, but using it on dogs, is relatively new. A tuning fork was used on all of Sophie's acupuncture points and it's supposed to open up the pathways to help to improve her breathing. Sophie sounded better afterwards, so we'll see how it goes. Have any of you heard of this? 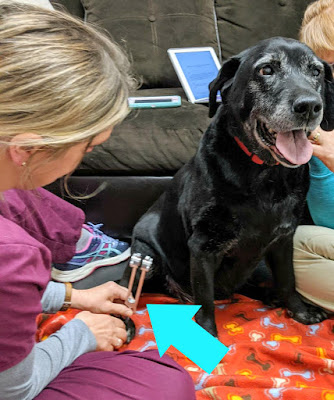 Finally, on Tuesday, I received an e-mail from Lab Rescue, asking us to take another "hospice-foster-dog." I said "no" because this boy, named Oscar, doesn't like cats or small dogs. And despite Todd being a big dog in a little dog suit, something I would never tell him, I didn't think it would be a fit. Then came another e-mail on Wednesday ...


...would you consider Dexter.  He is being returned to us after being adopted in 2013.  He is now 13 years young, and about 80lbs. He's had a rough go of it: He was left with a family member when the original adoptive couple split up, then left with another family member “for a week” six months ago.  Since then their landlord told them they have to get back to two dogs. When they started looking into rehoming him, and trying to locate vet records, they found out he came from us.

Dexter doesn't enjoy small children poking around in his face, and isn't a fan of having his ears cleaned or nails trimmed. Beyond that, he's reportedly 'a terrific dog.' Housetrained, enjoys hanging out in the yard and napping on the couch, good with cats and other dogs.

Below is a collage of pictures taken 5 years ago. As always, I'm sorry that Dexter has found himself without a home. But I'm always grateful that the rescue is there to take them back and keep them safe. I don't know yet when Dexter will arrive. But I look forward to meeting our 'newest Valentine. 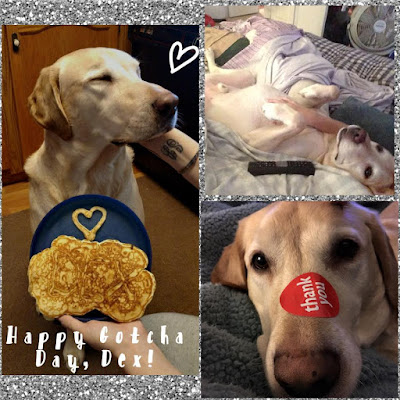