The doctor that I work for has decided to close the office until at least April 1st. My co-workers and I knew the day may be coming. In an office full of germaphobes, we supported it coming sooner, rather than later. The patients that I spoke to about rescheduling their appointments understood. However, there is always one who doesn't, and *he* is insisting on being seen for treatment that he has put off for a couple of years. So, I'm working on Friday to assist the doctor.
So, with my new found time off, I will admit to having grandioso plans of things that I could do while I'm at home. In fact, one of my co-workers and I have made a bet to see which one of us will get that one task done that we have put off doing (because we didn't want to do it) before the office is scheduled to reopen on April first. The loser has to buy lunch. The job I keep putting off?  Just look at the photo below. This kitchen cabinet has been a thorn in my side for months. I've been shoving things into it to the point where I just about cannot get the doors to close. It's the cabinet that I keep all the dog medications and dry and canned good in.  Believe it or not, I do know most of what is in there. But I have to admit that there is also no telling what's hiding in the back or under something that I've forgotten about. Which is why it really needs be organized. 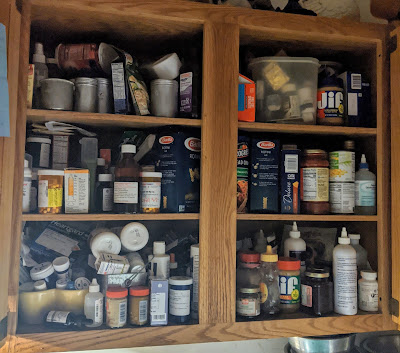 But it's after 2 o'clock, and I've not even had lunch yet. I'll think about doing that or another task tomorrow... Yeah, tomorrow .... There's plenty of time ... Right now, I need to go see what Todd is barking at. 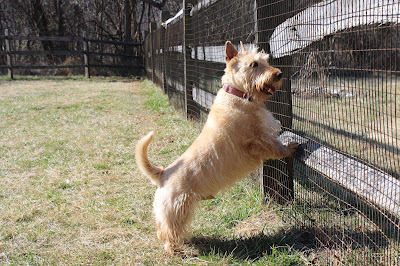