Thank-you all for your support and great suggestions on how to curb the barking problem we're having with George and Abe. You have been a tremendous help by reminding me of some of the tried and true tricks that I'd not thought to try or remembered. Another thank-you to kruzingwithk9s who reminded me about "Composure." I've used it before, and had good success with it. The more potent and vet prescription of it, called Composure Pro, should be arriving on Monday; thanks to Mobile Vet for letting me order it through him via an online pharmacy. I've also got new Lavender essential oil, and added another that I like, called Serenity. Our house smells really good now!
Longtime readers of this blog may remember a dog we had a number of years ago named Rudi. She'd come to us in 2003 as a foster dog for the Golden Retriever Rescue. At just over 2 years old, she'd already had 3 homes, and we were her 4th. Rudi had been mistreated, mishandled, and totally misunderstood. I struggled with Rudi for months. She was seemingly out of control, mostly because of her barking. Even a behaviorist considered Rudi unadoptable. I just felt like Rudi had so much potential, and I just couldn't give up on her. I tried every medication, including a citronella bark-collar, which by the way, made her even worse, because I think she liked the smell of it. But at some point, I stopped trying to control Rudi, and just let her be herself. Because when I tried to control her, her barking would escalate. Letting Rudi be who she was, was the biggest lesson she taught me. And this lesson became the cornerstone to how we have handled each and every foster dog since then - We let them be themselves, and add in the rules, the best we can, as we go along.
I tell you this only because I was reminded of Rudi this week. I was out with Rhett and Max on a walk around our property when the two found the partial remains of a deer.
A similar thing had happened several years ago with Rudi in about the same place. I remembered that when I'd told Carl about it, and asked him to dispose of  "the part" he'd asked how he'd ever find it in our big front yard. I told him to take Rudi with him, and she'd show him where it was. And she did. The photo below is of her rolling on "it" while Carl was trying to clean it up. The picture made me laugh then, and it still does now. . 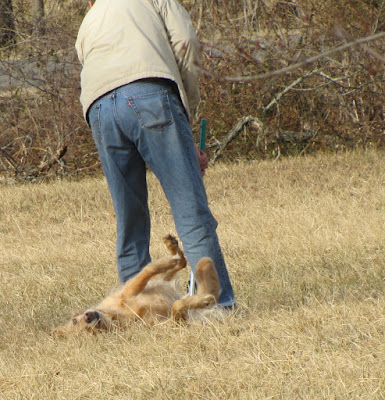 Okay, so if you're still reading, this brings me to the lesson I remembered this week. I understood Rudi, and I let her be herself. When I did that, it all came together for Rudi and for us. I've not let the Barkalot Brothers be who they are. We've tried to control them and their barking, which has made the barking even worse. YOU'VE reminded me that I needed to give and take time with George and Abe to understand them, and let them be themselves. So, I've started doing that, and believe it or not, things have been much better the last few days. No, it's not perfect, but perfect doesn't work for us anyway.
We still have progress to make. But I think the spray bottle, which I just have to show George, along with the essential oils are working, and I think the "Composure" will make a difference too. You know, it took me months to learn these lessons from Rudi. From the Barkalot brothers, it took me just over two weeks. That's progress. But it is a lesson that has come again because of a combination of my total exhaustion, your thoughts on my previous post and in remembering Rudi.

And so, as I sit here this morning, the sun is coming up and everything is peaceful. George is snoring on a dog-bed nearby with Abe. I am remembering my beloved girl Rudi and my heart is full of gratitude and I am humbled.  Thank-you all for your help and for cheering us on. I think we are going to be okay. I think Abe and George are going to be okay too.


Now if someone could just help me to figure out Todd.... 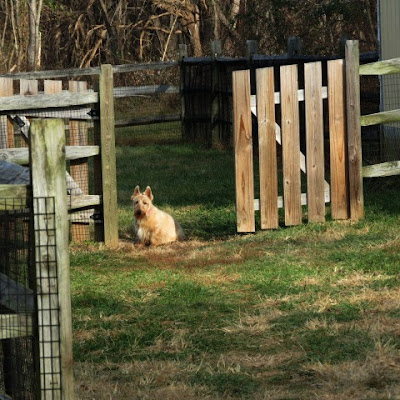 If you want a trip down my memory lane click here to read my blog post where I paid tribute to truly, one of the best dogs I've ever had, my girl Rudi. 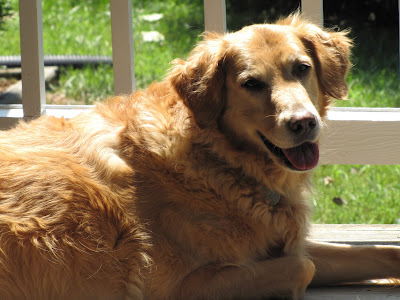