A New Arrival and Charlie

Two weeks? Really? In many ways, it seems like more time than that has passed since I last posted, but in other ways, it's doesn't. I hope it goes without saying that I've missed my blogging friends and that glimpse into your lives and world. 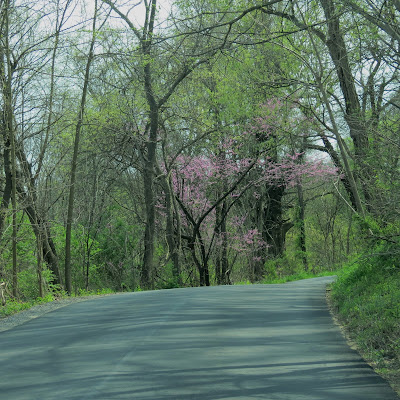 I think I'll begin with a new arrival. Two weeks ago today we welcomed a new feline. He and 7 other cats were left behind when their owner moved.  The "cat-coalition" in our county trapped them, and now that they are all vetted, they are ready for new outdoor homes. 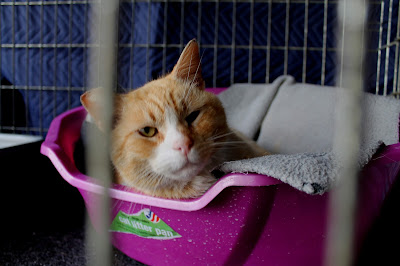 It was really a chance meeting when I was dropping off our foster cat at the vets office who had been adopted. But I'm not sure how it happened. One moment I was saying how handsome "Orangie" was, and the next minute, the cat-coordinator had him packed up and was taking him to my van and she was telling me there was no adoption fee. Gino, as I've decided to call him, will be an outdoor cat. For about another month, he'll be crated in our garage with an outside view during the day, and free inside at night, to help connect to the new place he calls home.  He's a really nice cat, and I'm hopeful and hoping he'll want to stay around. Even though he doesn't really seem to like the dogs. 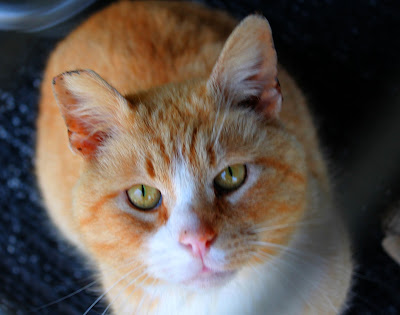 I'll save some of the other news that has consumed me for another post, and tell you about Charlie.

Two weeks ago he went to the groomer for his spring haircut. When I returned to pick him up, Irina (our Romanian groomer) told me about a lump she'd noticed on Charlie's bottom. She was quite concerned about it, and told me to be sure and have it checked out by our vet. Mobile vet came last week and confirmed that it was an anal-gland-tumor that is more than likely cancer. After seeing a surgeon, we've been told there are few options.  But surgery should be done. 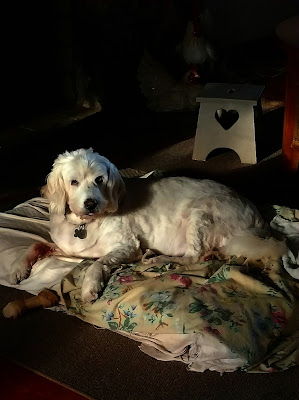 Before proceeding with any surgery, I felt like I should know if the cancer, which has a high probability of spreading, has metastasized anywhere else. The surgeon didn't do x-rays and so I returned to Mobile Vet to have them done. It was good news in that it doesn't appear to have spread, and Charlie's blood work looks pretty good for a dog of his respectable age (about 13).
With this news, I've decided to move forward and do a palliative surgery to remove the single mass, and no lymph nodes even if the cancer has spread into them. I'm hoping that will give Charlie more time, and make him more comfortable. The holistic vet that sees Jake will also play a part in helping to manage Charlie's health.

For several reasons, I've opted to not have the surgeon who did the console not do the surgery. Instead, I'll be contacting another place to see about getting it scheduled.  I'm hoping that "this place" will be able to take Charlie as a patient. When and if they do, I'll fill  you in on those details.

Of course I'm worried about him. But I am optimistic about everything, and I feel like we have a good plan going forward. Charlie is feeling well and that really helps too. I'll end by sharing one of Charlie's x-rays. Mobile Vet commented when reviewing it that Charlie has a big heart. I told him I didn't need to see an x-ray to know that. Those of  you who are longtime readers of this blog, know that too. 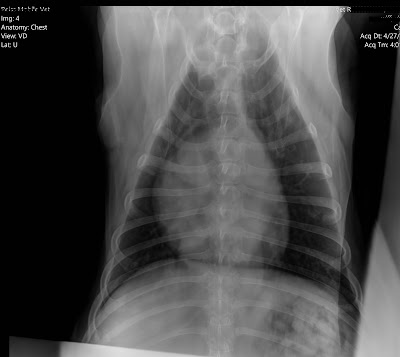 Thank-you all for stopping by.  I hope you all are doing well, and I so look forward to catching up on your news.

Clouds and cold may be finally giving way to warm, bright sun. It'll hopefully come just in time as Charlie is at the groomers today, getting his much needed spring 'do. 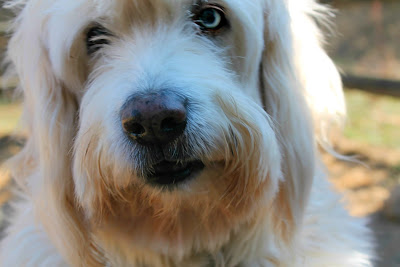 I have chatted a few more times with the Retired Man who adopted Jameson.  It was so good to hear that he's decided to stick with Jameson and work through the issues he's having when he's on lead. A friend from the rescue suggested that the more time they spent together, the more Retired Man would become committed to Jameson. It appears that she was right and I continue to hope that'll be the case. 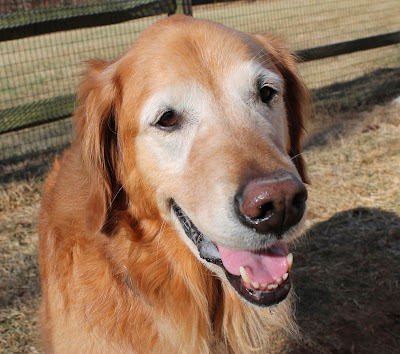 This brings me to the newest arrival, Kirsten.  She's settled in really nicely, and has not been a moment of trouble. She's a little timid, but a very gentle and quiet little thing (she's 30 pounds). She's like a little ghost as she follows us all over the house, always watching what we're doing, never imposing herself into anything, but keeping her distance until we acknowledge her.  You cannot help but like her.  This is why I told the foster home coordinator from the rescue that we would love to foster her.  The uncertainty about her left eye means that she'll need to see an opthamologist.  And since there is a specialty vet-care center nearby where she could be taken, it just seems to make sense to have her stay with us for now.
Continuing to stay with us is for now is Misty.  Still no one in particular is interested in her. I've been asked twice from a couple of people at Lab Rescue about our adopting her. While I think Misty is the total senior dog package, right now, I think they need to keep promoting her, and trying to find a new home for her. 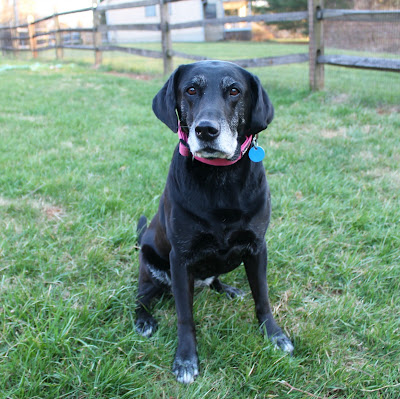 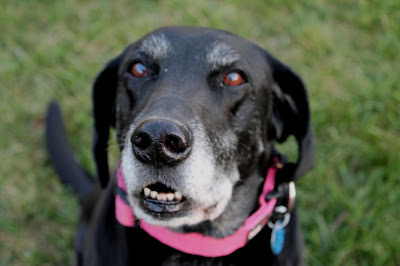 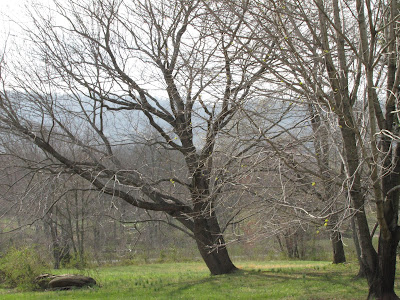 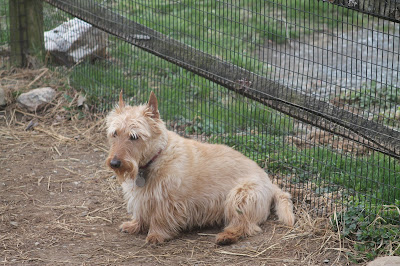 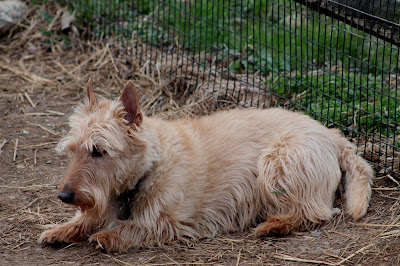 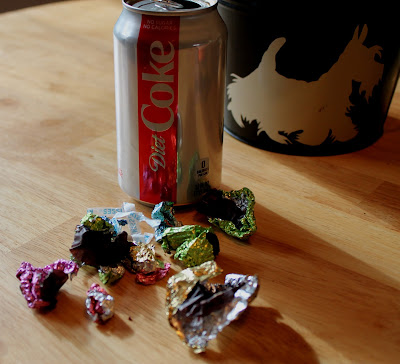 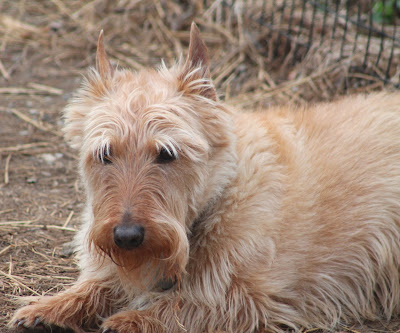 I'm so grateful to have the busy and hectic month of March in my rear view mirror. It did however end on a good note. 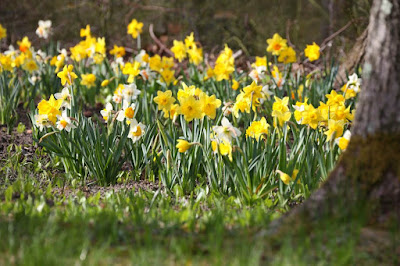 To begin, Jameson has found what I hope is his forever home.  I was happy to meet "Retired man" for Jameson because he ticked practically all of the boxes that I'd hoped to find for him. Retired Man lost his partner of nearly 20 years a couple of years ago, and his Golden this past November.  And in looking at both Jameson's and Retired Man's life, I felt that these two souls should be together.
But there have been a few problems with Jameson being reactive on a leash when he sees other dogs. It has really bothered Retired man and created some doubts for him.  But by Sunday evening, Retired Man seemed committed to working through this stumbling block with Jameson. So, I'm hopeful that their working together on this issue will become a stepping stone to help build a strong connection between them.
At home, as you know, our dog-beds never get cold.  On Wednesday I was asked if I could meet a transport that was bringing 8 year old Kirsten. The timing of her arrival along with the holiday weekend, wasn't going to allow her to be put into boarding. So, I agreed to meet the person who was transporting Kirsten and keep her until another foster home could be found. Kirsten was a stray that came into a shelter in rural Virginia towards the end of February. She's a small girl (that makes Todd look stocky) very thin and blind in her left eye.
Kirsten has a endearing and very quiet spirit. Introductions to our dogs went really well because she's not an "in your face kinda gal" which suits Todd and Max just fine.
Kirsten has traveled nearly 250 miles (about 403 kilometers) to get a start at a new and better life.  I'm grateful to be part of this lost girls story who has found her way to Golden Pines.