To paraphrase an old saying: The only constant in life is change. And change is what has and is coming to Golden Pines.

This past week, we had a new arrival.  This very special newcomer is the reason why I felt like we couldn't keep our foster-kitty, Mo.  His name is Tubby (after Tubby Smith, a former UK basketball coach)  and he's about 14 years old.
Tubby is considered "family" because he used to belong to my Mother.  Since my Mom passed, Tubby has been cared for by my youngest brother that lives in Kentucky. Changes in his life have brought Tubby to live with us. Tubby has never really been around dogs, so we were concerned that he might not get along with them.  It turns out, Tubby isn't bothered the least bit by them. On the feline side, he and Ms. Yellow are learning to ignore one another. And he has claimed a favorite spot, on top of the kitchen cabinets, as his own.  All in all, I'm really pleased that this family member is settling into his new life with us so well. 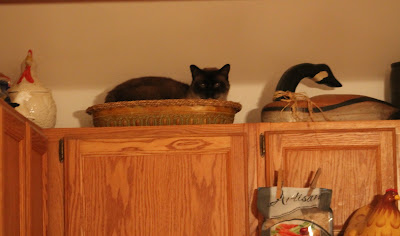 Tubby is the precursor to a few other changes that I'll tell you about as they occur.  One change that we had this weekend was Max.  He was groomed.  I didn't take him to our "regular" groomer, but one that I knew would take her time and be careful with Max because of his knees.  What I didn't know is that she would sheer him like a sheep!  With cold temps the last couple of days, it had Max shivering so I put a shirt on him to keep him warm.  Poor Max.... 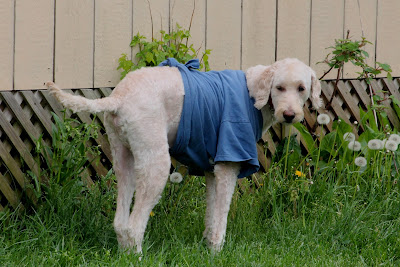 Finally, I want to thank-you all for your kind and supportive comments during this "unfortunate incident" with Todd.  I saw my friend's daughter today, and thankfully her finger has healed nicely. Tomorrow morning the Department of Health comes for a last health-check of  Todd. 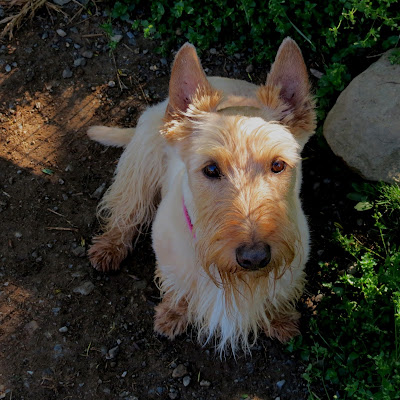 I am so looking forward to putting this whole event behind us. 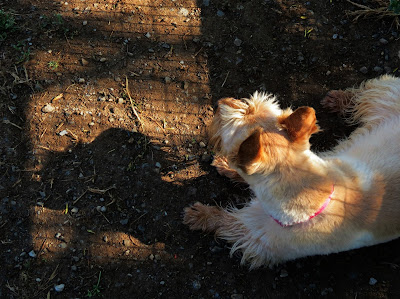 A new sign that I ordered arrived today, as a week that has been pretty low key is coming to an end. 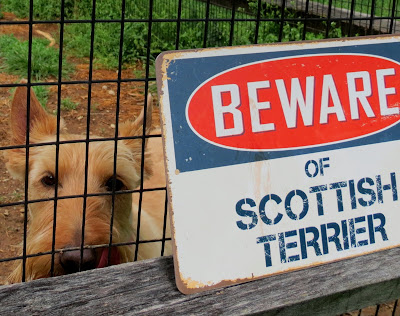 I did have one morning off work so the Department of Health from my county could come and see Todd.  Even though Animal Control considers the "biting incident" closed, the Department of Health has their procedures and protocol, which is to see for themselves that Todd is healthy, and confirm for their records that his rabies vaccination is up to date. 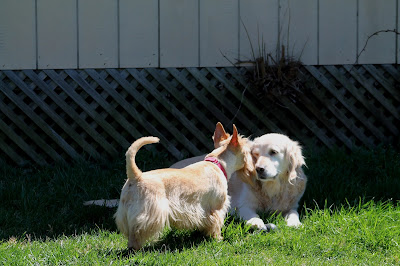 They also needed to let me know that Todd is to be confined at home for 10 days. 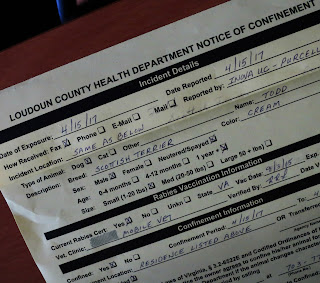 The agent from the Health Department will return next week.  He'll verify that Todd is still healthy and at that time, this whole unfortunate bite-incident should hopefully be behind us. 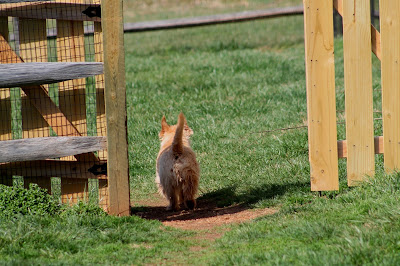 But I've never been so worried about keeping a dog healthy before! 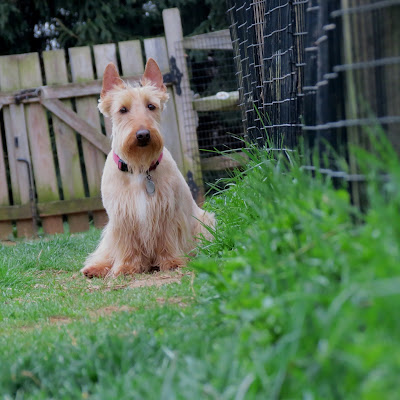 "T" is for Todd and Trouble!

Well, what I'd hoped would be a quiet Easter weekend at home alone, didn't end up that way.
I'll preface this by saying that those of you with Scotties, know that they are a bold and a dignified dog. And they can also be territorial - Todd is no exception to this.  He defends his territory against everything and anything.  When people come to see us, and he's outside he is barking and jumping up at the fence.  He does settle down a few minutes after their arrival.  But I always warn people to keep their hands away from him. 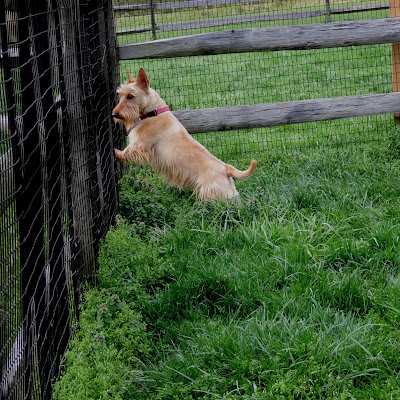 So, when a friend stopped by on Saturday with her adult daughter and the dogs were outside, she asked if she could pet them.  I told her "NO!" that Todd would probably bite her.  I even warned her a second time, and she did listen to my warning.  But there was a quilt laying over the fence, and as Todd was jumping up, he was grabbing it, and so my friends daughter reached over and pulled it back - And can you guess what happened next? 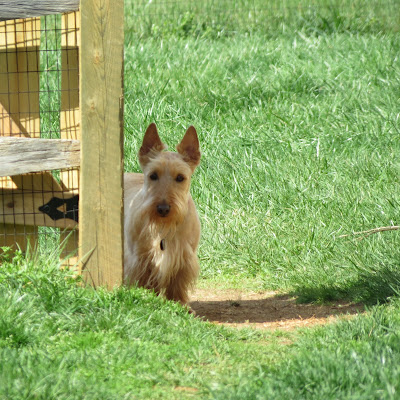 Yes... At the moment she pulled the quilt back, Todd jumped up and he bit her, caught her "pinkie", whatever you say happened, it doesn't matter, the end result is the same, her finger was bloodied.  My heart sank when I saw it.  Inside we cleaned it off, and agreed that it needed medical attention.

I knew what this meant.  Anytime you need medical attention for a dog-bite, nip or whatever, a report is always filed in the county with Animal Control. I mentioned this to my friend and her daughter to let them know what to expect, and they told me they'd try to keep our names off of any report.  I appreciated they're saying that they would do that, but I knew that it may not be possible.  **And I'll just add here, that I would and do take full responsibility for anything our dogs do, no matter what or even who it may be.  And of course I offered to pay all medical expenses for my friend's daughter, but they graciously refused.  They have been very understanding, nice, etc.,  about it, and admit that a mistake was made in moving the quilt. 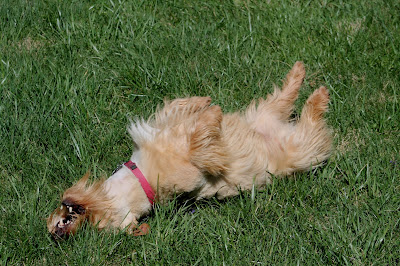 But another phone call from the Sheriff's Office in our county would come later. They had no choice but to file a bite-report against Todd.  My phone call from a deputy would come soon after and he told me that the entire incident did not meet the criteria of what a "dangerous dog" is defined as.  Todd is licensed in the county, up to date with vaccines, and the Deputy confirmed all of his information.  The case is (thankfully) considered closed.  But I've taken this very seriously and as a wake-up-call to not be so complacent when strangers are around because Todd does now have a "criminal record." And I know full well that IF there is a next time, we may not get off so easily now that we know that Todd's bite can be just as bad as his bark! 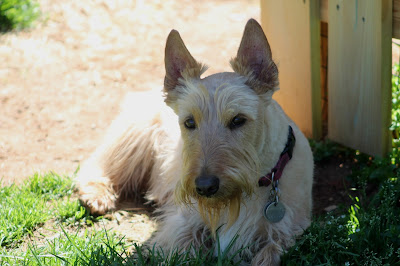 Catching Up to Easter

We all know spring has sprung, and April is already confirming what we already know, and that's that it's an unusually busy month at our house.

Max (below) was released from the care of the orthopedic surgeon a few weeks ago.  With the all clear, he'll finally be able to get that much needed visit to the groomer. 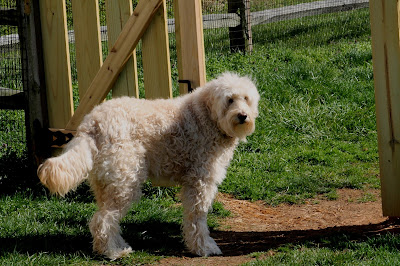 He really needs it! 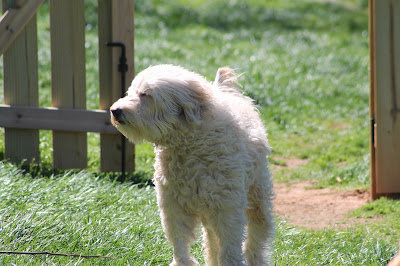 Charlie had his spring hair-cut this past Thursday. 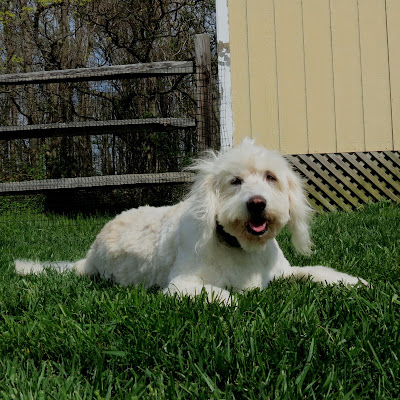 Bo has been enrolled in a "nose class" that began last week.  It's a very basic beginner class. He is the first blind dog that the instructor has had in any of her classes. The dogs attended the 2nd class.  We practiced their finding food-treats in boxes scattered in the ring.  Bo did better on his second try after I changed what he was looking to cheese-popcorn. I'm hoping the class will build his confidence and get him out of his shell. 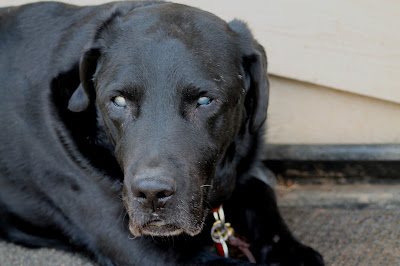 We have also said good-bye, for the third time to our foster-kitty, Mo.  I know, I know, I should have (and was going to) adopt him.  But for several reasons that I'll tell you about in another post, we didn't. I have left the door open for him to return to us if it doesn't work out. 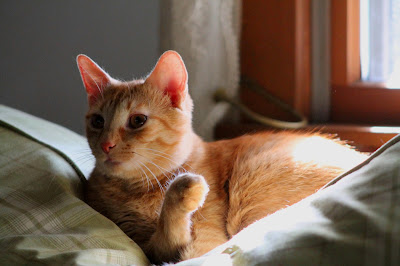 Carl has been out of town, and will be back on Monday. So Easter weekend will be a quiet one at our house.  I wonder what kind of trouble we will Todd can get into? 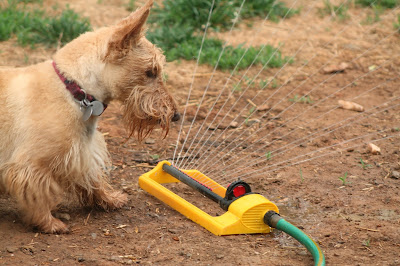 This week Todd was taken to the groomer for his spring-do, 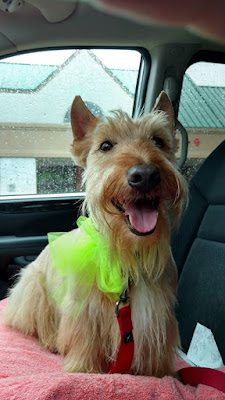 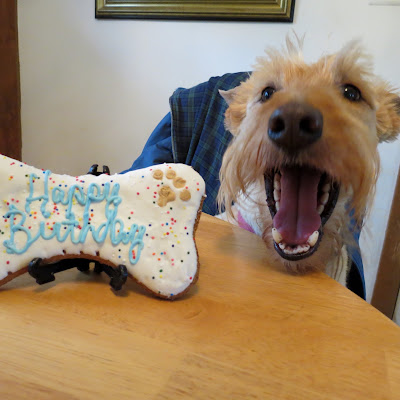 In his six years the guarding skill of this Rocky Creek Scottie is second to none!  Todd has watched over and kept us safe from the bill-bringing-mailman, countless-would-be robbing UPS and Fed Ex Drivers. 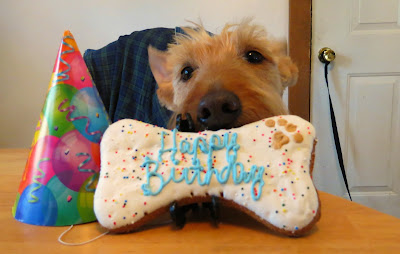 He has has protected us from the gangs of deer, packs of wild rabbits and some sketchy Canadian Geese that have flown overhead. 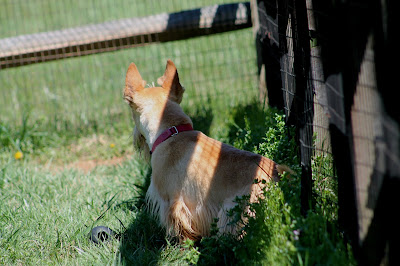 And for that we are grateful, which is why it was okay that he had my shoe...For a minute... 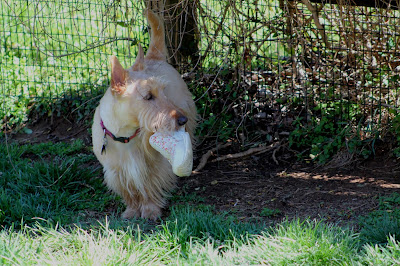 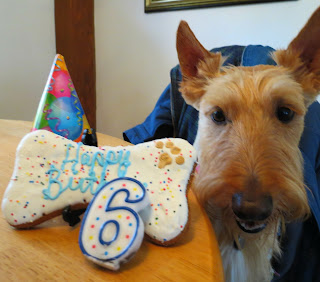 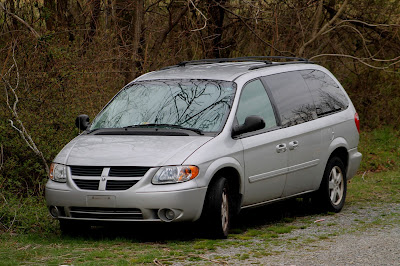 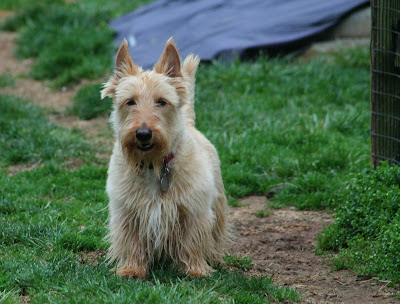 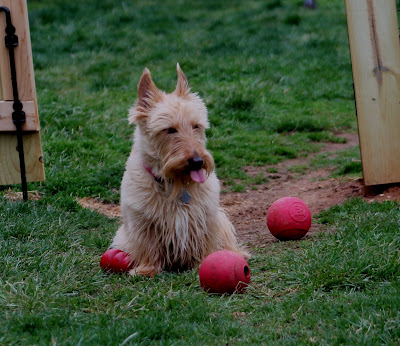 **I donated my "old van" to the SPCA of Northern Virginia.  There are so many good charities and causes, and donating a car, truck, boat or even a plane is a great way to support them.
Posted by ~Kim at Golden Pines~ at 10:36 PM 23 comments: