Happy day after Thanksgiving! Thanksgiving is one of my favorite holidays because it’s all about getting together and reconnecting with the people we care about and remembering what we have to be thankful for - And it is of course a day, and a day after where you have an excuse to overeat.
We had a really nice dinner at home. I'll admit that this year, the table was not going to make the cover of a decorating magazine. Don't get me wrong, I really do love a beautifully set table, especially for a holiday or special occasion. Who doesn't?
But I have to say that it's totally lost on my husband and brother. So because of that, I didn't feel the pressure to morph into Martha Stewart for the day. It's never going to happen today or any day for that matter, and it's okay!

Max, (below) cares nothing about Martha Stewart. After dinner and dessert he came to the table hoping there may be something left for him. 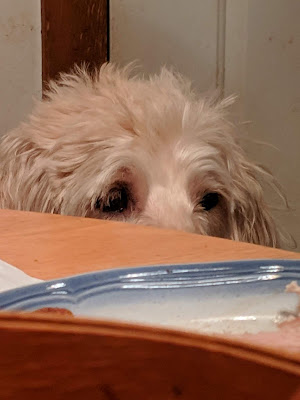 Another hopeful after dinner was Sunny. I don't write much about Sunny, and I should. He is slowing down a bit and the cold days are hard for him because of his arthritis. He avoids the spotlight and especially a camera whenever he can. But he doesn't realize that I'm taking his picture with my phone, so Sunny is staying around when he sees it in front of him. 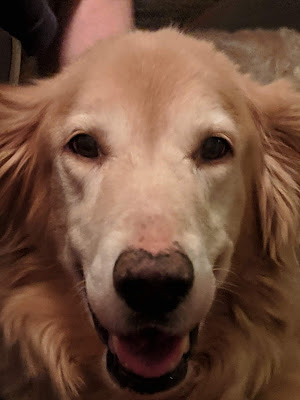 But all the dogs did get a little bit of turkey added to their evening meal, the ultimate treat for them. Todd, checking out the refrigerator this morning, is hoping for the same thing this morning. Again,m he and the others were not disappointed. 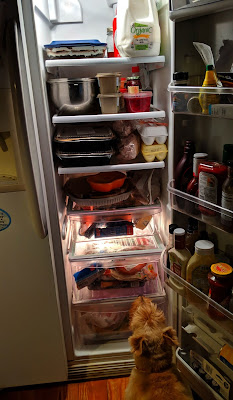 Now with one holiday behind us, it's onto the next one. Our foster girl Nina is now available for adoption via Lab Rescue. So she's also hopeful and waiting and ready to find her forever home. 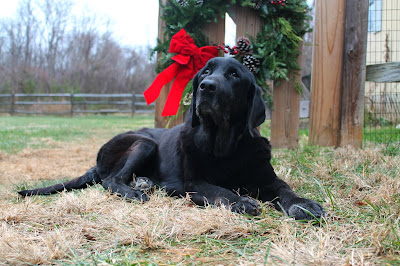 Up early this morning as the first snow of the season began to fall. 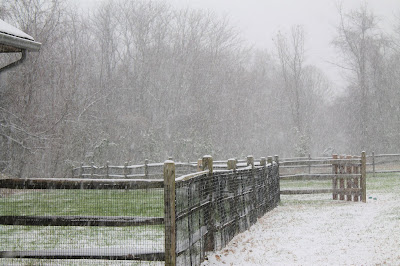 We ended up with about 4-5 inches that wasn't pretty snow at all. It was mixed with sleet and rain and made a mess of everything. An appointment that I had cancelled, so I was able to be home all day. 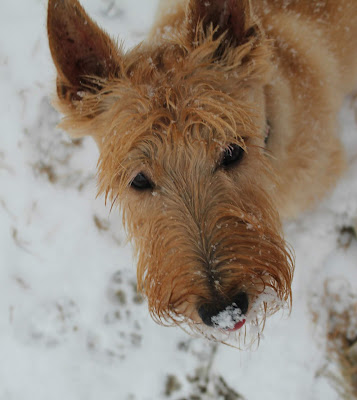 The dogs liked being outside and taking in the fresh smells that only the first snow can bring. 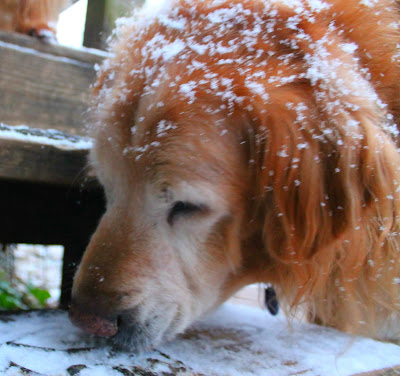 Well, most of the dogs did. Max doesn't like to get his curls wet. 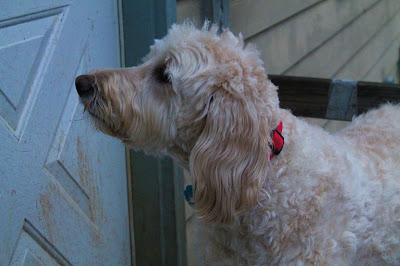 Thank you all for the good thoughts and vibes for Bailey. Internist Vet thinks that Bailey might have mega-esophagus.
When all the test results are returned, we'll know for sure and be able to make a plan going forward for her. We changed up a couple of Bailey's medications, and she's had a good week.
So with snow today and a good week for Bailey, this Thursday couldn't be any better. 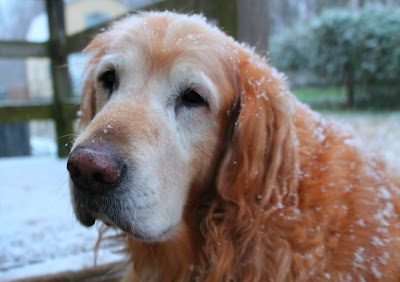 But just to see if it could be, I baked some chocolate chip cookies.  And I was right, it did make it just a little better. 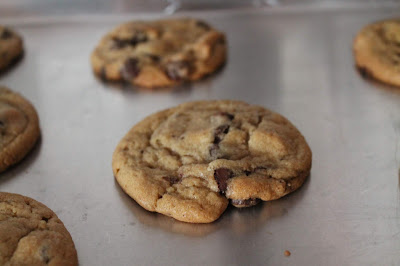 I hope you had a good Thursday too! 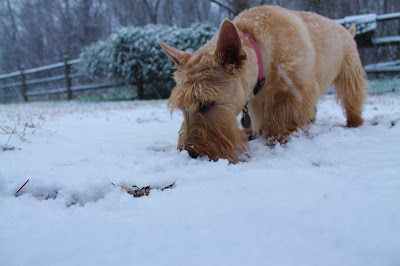 We again round the corner to the end of the week that has been a mostly quiet one.  My day off today filled with errands, and taking Max to the groomers for a winter-haircut that will last him through the cold months ahead. 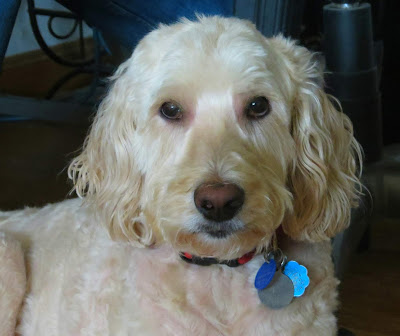 Tomorrow morning I'm off to the veterinary internist with Bailey for an ultrasound. She's had a  productive cough the last several months. Antibiotics have helped, and the cough all but disappears, and Bailey feels better, but then the cough returns.

Then the vet puts Bailey back on the antibiotic, and the cycle starts all over again. I've lost track of how many nights I've listened to her raspy breathing and we've both been awake as she coughs up fluid over and over again. At 13 years old it's taking its toll on her. X-rays show a spot on Bailey's lung near her heart is probably the culprit. But its hard to see because of a large lipoma that's blocking and clouding the view. 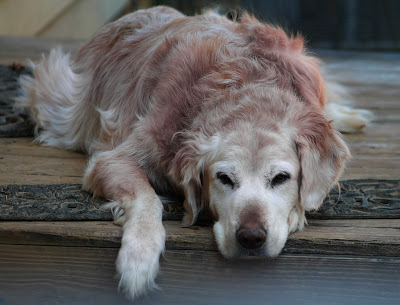 So we are hoping that tomorrows ultrasound brings the needed answers for Bailey.

And finally can you answer the question of who our outdoor kitty Gino is reacting to? 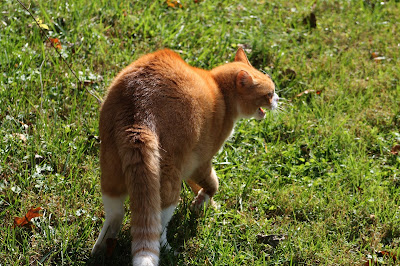 Thanks for your guesses on who Kirsten picked as her forever home. I had fun reading who you thought would be a good fit for Kirsten.  You were all right, both Ms PhD or Old Friend would have both been a good match for Kirsten.

So, I will start by telling you that I did not pick the Grandparents for Kirsten. The reason was based on "Grandma's" purely and utterly absurd and ridiculous concern that Kirsten's missing eye would scare her grandchildren. Grandma was also worried about how she would explain it to them and other people who she was so sure would be frightened by Kirsten's missing eye and even her spotty tongue. Based solely on what I felt and feel is so ludicrous,  I could not end the visit fast enough.
So that left the two people who you thought and I liked very much for Kirsten. But in the end, it came down to who I felt Kirsten really connected with, and that was Ms PhD and her dog Frisky.  Kirsten responded really well to them both, and there were lots of tail wags and an ease and comfort that just seemed so natural when they were together. I also really thought Kirsten needed to have a canine companion. And with Frisky being a bit shy, I thought the quiet reassurance that only a dog like Kirsten could give would help her, and allow Kirsten to blossom in that role.
The reports have all been positive ones, and I feel strongly that all is as it should be. I am grateful to be part of Kirsten's story that helped her find a forever home.

A Forever home for Kirsten - YOU Guess!

Back in March we welcomed Kirsten. And today, seven months later, Kirsten left us for her forever home.
When Kirsten first became available for adoption, there was practically no interest in her. Then, like that, I had three inquiries about her.  I decided to meet each of them.

The first Hopeful Adopter we met, Ms PhD was a single lady with a shy border collie mix named Frisky. With the passing of her last dog several months ago, Ms PhD really wanted Frisky to have a companion, so the two being compatible was important.  She lives in the country and is home most of the time and does therapy work with all her dogs. I let them all go for a walk together to get better acquainted. 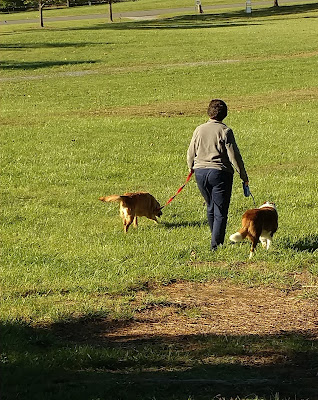 The second Hopeful Adopters, I'll call "the Grandparents" lived in the city and had specific hopes for their new addition. One requirement was that the new dog like and get along with young children. This was a concern because Kirsten came to us as a stray, so her past is totally unknown.  I let Grandma take her for a walk. 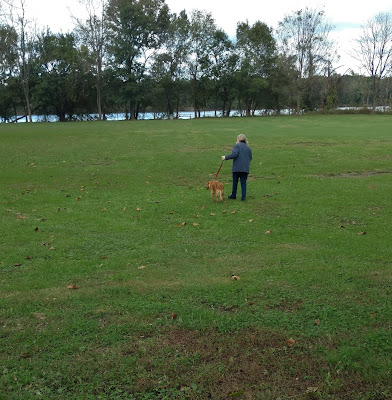 Finally, the third Hopeful Adopter I'll call Old Friend. It has been a number of years, but I knew her from the time that I served on the board of the rescue. She recently lost her Golden, and is looking for a dog to share her life and bed with. Old Friend lives in a retirement community so there are a lot of people and other dogs around. She took Kirsten for a walk too. 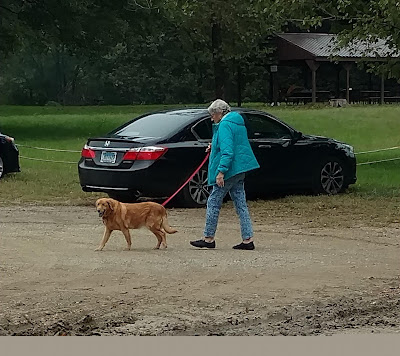 I've tried to not give too much away, and I know the pictures aren't the best, but can you guess who was picked for Kirsten?  Leave your guess, and I PROMISE to post on Sunday with who KIRSTEN chose as her forever home.