Happy post Christmas, blogging friends! How have your holidays been?  I don't know about you, but I ended up running around like a lunatic trying to get everything done. And yesterday, two days after Christmas, I finally got the last of my cards sent. Today two gifts go in the mail for my brothers and their families, and I will officially hobble across the Christmas-finish line. Hurray for me! 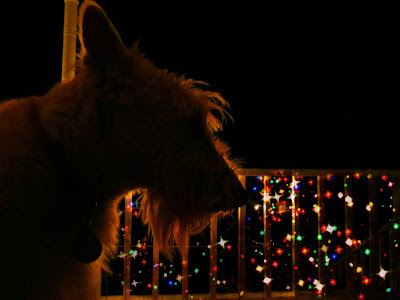 I have thought about my blog every single day since I last posted and really wanted to keep it up to date. But that just didn't happen. **Stephanie, thank-you for thinking of us and asking if we were okay!!** 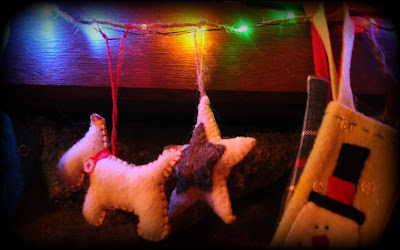 Last Saturday a friend and I were off to a matinee at the Kennedy Center to see the play, "Come From Away," which tells the true story of 7,000 passengers, who were on their way to different parts of America when the tragedy of 9/11 struck. As the American air space closed, 38 planes were grounded in the Newfoundland community of Gander, a town with only five hundred hotel rooms. My friend and I both loved it, and if you ever get the chance to see it, I highly recommend it!
Back at home, the Barkalot Brothers are still doing what they do best, barking. Abe returned to the vet for yet another glucose curve test, which he failed again. We've tweaked his insulin dose and food again, and next week, he'll go back for another test.
The Foster Home Coordinator has spoken to their previous owner, and the decision has been made to return Abe and George to him. However, the coordinator is adamant about not returning the two until Abe's medication is at its proper dose. This hasn't made *Paul* happy. And while I'll admit that I'm ready for them to leave us, I support the coordinators decision to keep them for a bit longer.
Moving onto our only girl Sophie. Her appetite is off, and she's been coughing a bit more than I'd like and she's breathing pretty heavily at times too.  Sophie is due to return to the vet in January. I just hope this isn't a sign of the progression of the laryngeal paralysis, or the return of the thyroid cancer she was treated for before she came to us.
The rest of our cast of characters are doing pretty well. Knock on wood of course. They're in pretty good spirits too.
Well, Todd wasn't for about 5 minutes when he had to do another quick photo shoot for me. 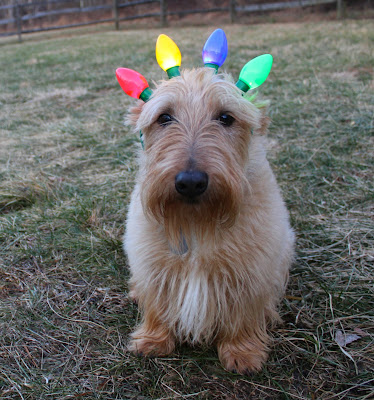 Another blogger calls these pictures, "The Hat Tax." She says it's a tax "for the costs our beloved dogs incur without contributing financially to the household, so several times per year, usually around holidays, they are required to pay the hat tax."  I am totally embracing this tax, and explained all this to Todd. Being a Scottie, and given that there were lots of treats involved, I think he understood, because in less than 5 minutes he was "paid in full" and the photo session ended. 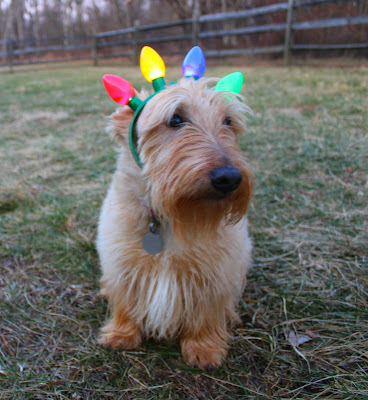 It was the same for Rhett. Who I think looks dignified no matter what ridiculous thing I put onto him. 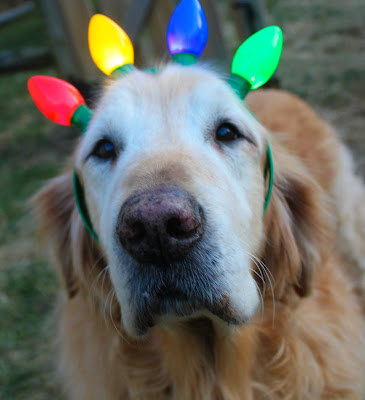 And so with that, it's onto the end of the year! 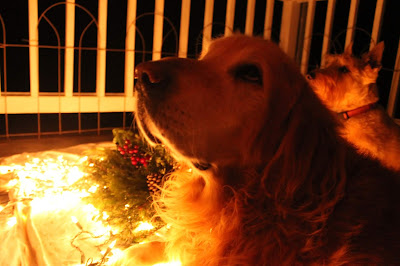 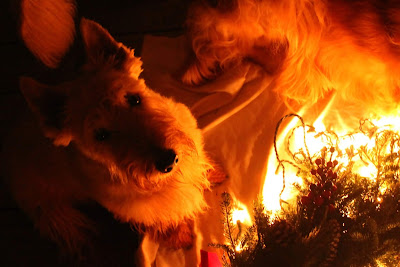 Lab Rescue received the below e-mail yesterday from the previous owner of Abe and George. I spoke to the foster home coordinator last evening, who had discussed everything at length with the president of the rescue.

DEAR LAB RESCUE MY NAME IS PAUL ******* AND I AM THE OWNER OF ABE AND GEORGE WHO PLACED THEM WITH YOUR AGENCY FOR ADOPTION. BECAUSE OF FAMILY PRESSURE , I WAS IN THE HOSPITAL AT THE TIME .MY (THIRD TIME IN N2 YEARS) THIS CREATED A HARDSHIP ON MY FAMILY TAKING CARE OF ABE AND GEORGE AS THEY LIVE IN *****COUNTY AND I LIVE IN ***** .IT WAS BECAUSE OF THIS HARDSHIP AND FAMILY PRESSURE THAT I REGRETFULLY PUT MY BOYS UP FOR ADOPTION. I IMMEDIATELY REGRETTED THIS DECISION .

I NOW AM OUT OF HOSPITAL AND GIVEN A CLEAR BILL OF HEALTH ALSO I NOW HAVE SEVERAL PEOPLE WILLING TO TAKE CARE OF ABE AND GEORGE IN CASE I WOULD BECOME SICK IN THE FUTURE .SINCE I HAVE BEEN HOME I MISS MY BOYS GREATLY .I VERY MUCH LOVE ABE AND GEORGE AND MY HOME IS NOT THE SAME WITHOUT THEM .MY WIFE AND I HAVE HAD ABE AND GEORGE SINCE THEY WERE 10 WEEKS OLD MY WIFE PASSED IN 2017 AND NOW MY BOYS ARE GONE .PLEASE FIND IT IN YOUR HEART TO REUNITE ME WITH ABE AND GEORGE ,I LOVE THEM VERY MUCH AND MISS THEIR UNCONDITIONAL LOVE . I AM PRAYING THAT YOU REACH OUT TO ME AND I AM REUNITED WITH MY BOYS

Returning Abe and George to their previous owner is being seriously considered.  The foster home coordinator is going to reach out to the previous owner today and she will make the decision. I told her that I trusted her to make the best decision. But I am not sure how I feel about it. Of course my first concern is for Abe and George. They needed all their care updated when they first came into the rescue. Also to consider is that Abe is diabetic. Also diagnosed when he came into the rescue. Will the owner be able to afford and give him the care he needs?

What do you think?

One holiday down, one more to go as this weekend comes to an end with my wallet a little emptier. I've done a bit more online shopping than I typically do. 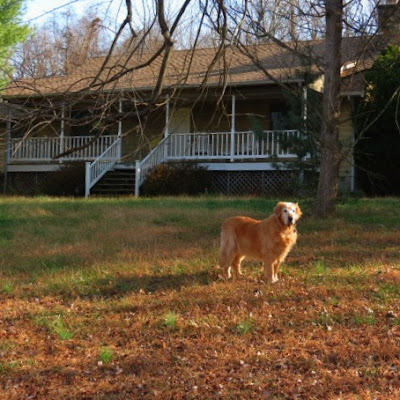 One of the things I try to get done is our Christmas card. For more than 20 years I've done a photo card with our dogs on the front. 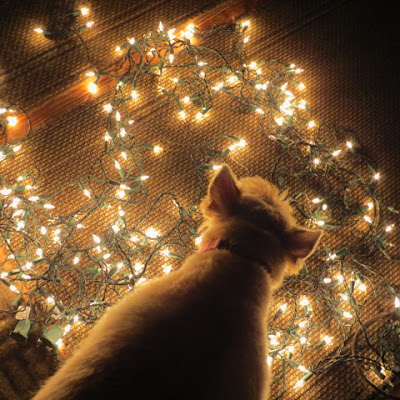 This year I had an idea for our card when I was in the shop where we buy dog food, and I saw *a hat.* My idea was to take a photo of each of the dogs wearing it, and put them all together. 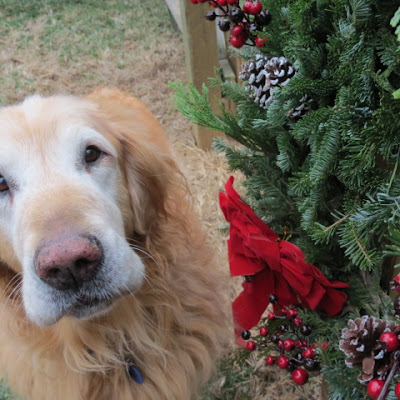 I chuckled as I took the first few photos.
But then when I put a few of them together on what would be the front of the card
I realized that none of the dogs were really showing that holiday cheer. So I decided to scrap that idea.
However, I still can't help but chuckle when I look at them.
Especially the ones of Todd. 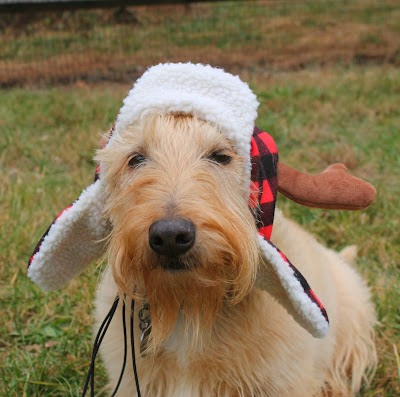 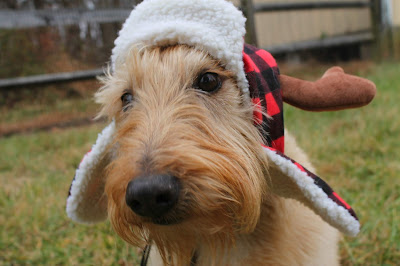 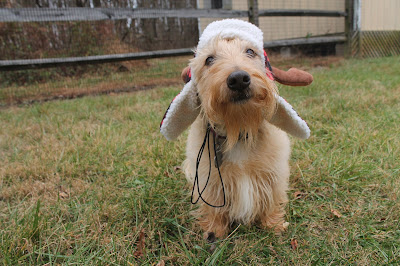 and his reaction, totally hated the hat. Don't you agree? 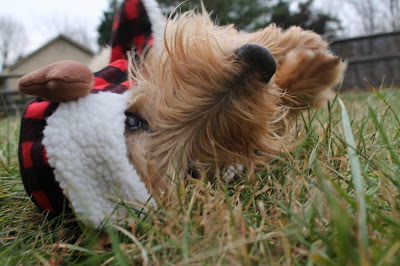 So, with that and the photos not showing any holiday spirit, I'm onto the next "great idea." 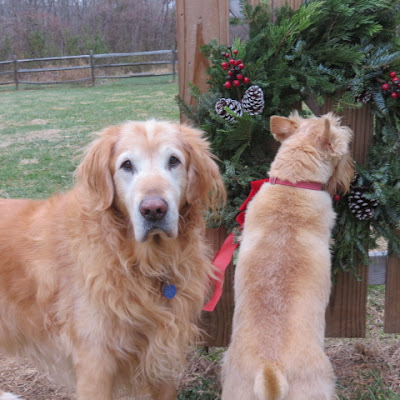