A full and extraordinarily busy week that began on Monday with the arrival of our new foster boy, Buddy.

Buddy who is 13 years old, was a very well traveled and treasured companion of a family that has lived in different places around the world. Unfortunately, a new job assignment in Australia, is one that Buddy, because of his physical condition is unable to make. 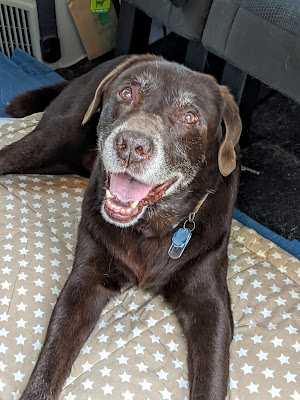 Buddy is an easy going, well socialized boy so he's settled in really nicely with his new pack-mates, which includes the cats too. 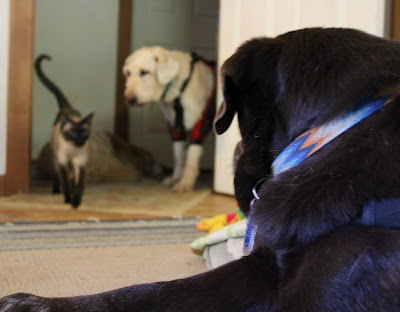 One issue we had right away was getting Buddy to eat. But I expected that. On Tuesday, he barely ate anything and showed his disapproval of the cuisine that was very different from his usual fare of canned food mixed with liverwurst. Sorry Buddy, but your days of eating liverwurst with your meals are over ...  And I was/am determined that Buddy's diet be close to what the other dogs eat, so on Wednesday, I offered him a dehydrated food mix, that he has eaten all of at every meal - (Yay!) So, I think that says that he likes it, so we can check "eating new food" off of our list.

Next on our list for Buddy was a vet visit on Friday. 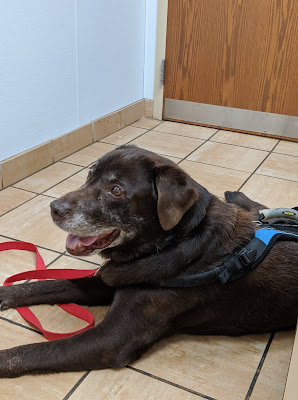 My biggest concern with him is the muscle deterioration in his rear end. Buddy needs a lot of help getting to his feet, and doesn't walk all that well and was diagnosed with spinal-stenosis a couple of years ago. (As a part of normal aging, the spine can develop arthritis - the discs begin to collapse and bone spurs form, and the ligaments around the joints of the spine begin to thicken). Long time readers will remember our boy Jake a few years ago that was diagnosed with the same thing. We did acupuncture and cold laser therapy for him, and it made a huge difference. Lab Rescue Vet totally agreed with that treatment, so I'm really hoping that Lab Rescue will agree and approve the expense so we can do it to hopefully help Buddy too. 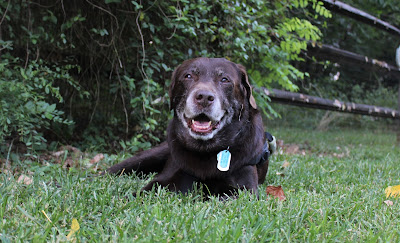 I'm sure Todd is glad you're here! 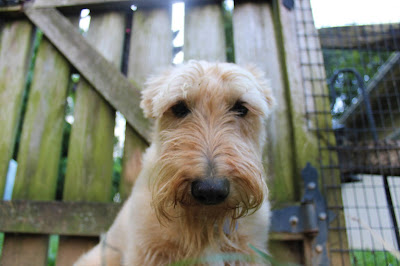 Carrying a Tune and Holding a Note

A fun little milestone yesterday for our Barkalot boy, George. It was 125 days ago that he was returned to us by his owner, sadly minus his Barkalot brother, Abe. George is involved in everything that goes on around the house, and his motto for his life has to be, "If I'm not barking about it, it's not important." But even with all the barking, he's a really nice, silly and endearing boy that has his own place in the household and my heart too. I'm so grateful he found his way back to us. 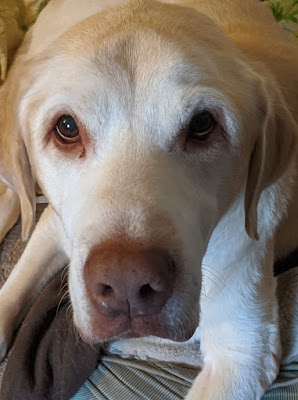 And by the way, we found out purely by accident a few weeks ago, that George can really carry a tune and hold a note. We knew that Max could when he hears a siren, but who knew that George could too?  It must be all that practice he gets barking!

The weekend at our house is a quiet one. Today my brother is working, and Carl for the first time since March, had to go into the office. Our week ahead looks to be a busy one, as we prepare for the arrival of a new foster boy on Monday evening. He's a 13 year old chocolate boy named Buddy, that I will tell you about when he arrives. 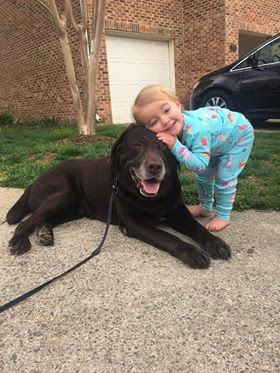 I Felt So Lucky

Its been a bit of an emotional roller-coaster for the last week or so. At some point, I may share why its been that way, and only say right now, at the start of the day, I'm emotionally worn out. I came home yesterday from work, changed my clothes and in the peace and quiet of our guest room, I laid on the bed and closed my eyes. 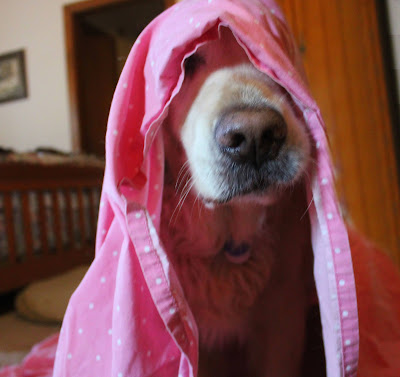 I was immediately joined by Todd who snuggled up right next to me. In the next moment Max came in and he also jumped on the bed, and laid down on the other side next to me. Max was quickly followed by a very happy George, Leo, Sophie, and Charlie who each stood on the side of the bed wagging their tails - George also tried to crawl on the bed.

Study after study has shown that our pets help us to maintain a more positive, optimistic perspective on life. And I've read that they can even lessen the symptoms of depression and anxiety. Whatever magic they have to do what they do best, that moment lifted my spirits and went straight to my heart and nurtured me in a way that nothing else could or can. I felt so much better. I felt so lucky. I am so lucky. 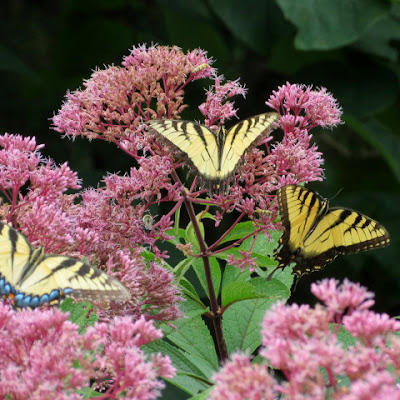 Back From Vacation. Back to the routine. Back to work, which is getting busier again as more patients are coming it. A full schedule wears me out. 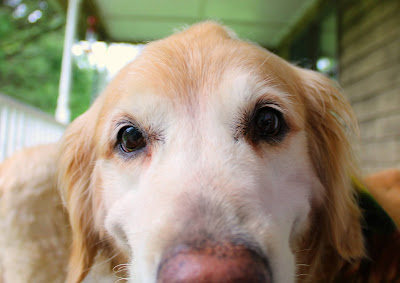 We were asked by Lab Rescue to take a new foster dog this past week. Simba was 14 years old. He was being turned over to the rescue because the family had to move into an apartment that wouldn't allow him. He'd not been to the vet in quite a while, and it was unfortunately discovered that he was in total kidney failure.
There was nothing that could be done. The coordinator contacted the family, and they came to be with him. I'm sure they were grateful for that kindness, and I'm grateful that someone that Simba knew was there with him as he left this life for the next.

We now wait for our next foster dog. Until that time comes, we're keeping 3 four-month-old kittens for another rescue until Tuesday. 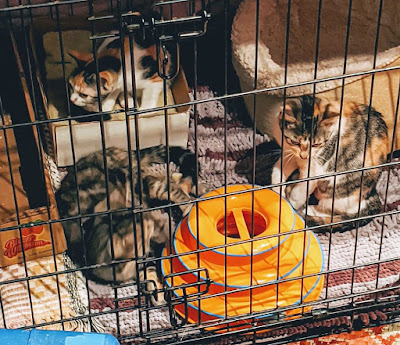 No new-comers has given us time to just spend with our crew. All of the sudden, the Labs seem to be shedding - There was a cloud of hair under George as Carl brushed him out.  But look at George's big smile. He loves being brushed. 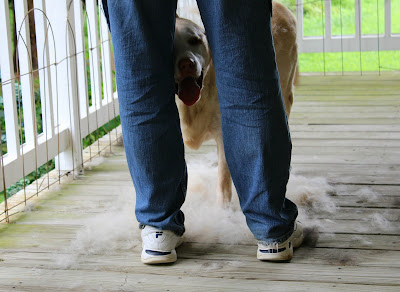 Todd doesn't like it so much and I'm sure he was just glad it wasn't him! 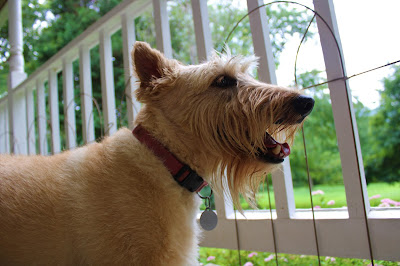 Before vacation Alf had his turn at being groomed. We have two groomers. Long-Time-Groomer that takes care of Charlie, Todd, Max and Sophie for me. Then there's "young-cool-groomer" who has groomed Alf and a couple of the other dogs for me. I called her beforehand, and we discussed Alf at great length because he has problems standing. She assured me that wasn't a problem and it could be scheduled on a day where she wasn't so busy. So, I left it to her to schedule it that way, even changing it one time in between. When I got there we talked again about Alf, but I couldn't help but notice the number of dogs being dropped off. I was still in the parking lot when my phone rang. It was "young-cool-groomer" telling me that she just didn't think she'd be able to groom Alf, giving me a couple of excuses, including his not being able to stand. Yes, I was irritated. 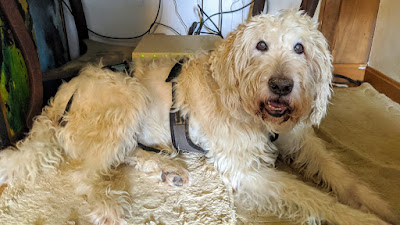 I understand that Alf's not being able to stand may have partly been the reason. But I really think "young cool groomer" had a full schedule, and just didn't have the time she needed for Alf, that she'd promised me she would make.

I was really grateful when the girl that comes to our house to trim our dogs nails, who has a good set of clippers, offered to do it. Nail-Trim-Girl did a pretty good job, and with the hot weather, Alf has been so much more comfortable.
In this weather, comfort is what it's all about! 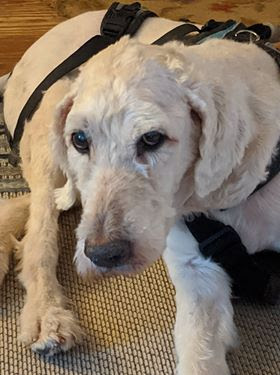 And as a post script, I'll add that "young-cool-groomer" and her cool significant other bought her business from "Long time groomer." who now sees select clients from her home. But I've really wanted to support young-cool-groomer and her significant other because I like them, and they do a good job and I want them to be a success. But a couple of glitches like this, has me doubting my return there, even though I recently won a contest they had that includes a discount for my next grooming appointment. We'll see.
Posted by ~Kim at Golden Pines~ at 10:52 PM 20 comments:

Home on Wednesday from Tennessee. 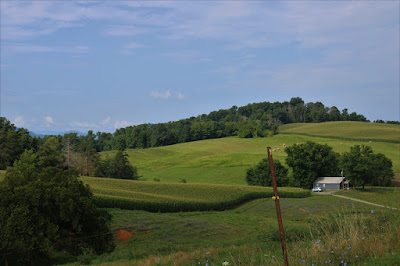 The nearly 8 hour drive back was long and uneventful and I dreamed of my trip for (maybe) next year. It's really a beautiful and peaceful place to visit and a perfect go-to spot with the dogs.
All the left-behinders were doing well and in good spirits. In the high temperatures we've been having lately, Sophie's breathing has become louder and harsher in this heat because of her laryngeal paralysis. We don't allow her to stay outside for long, and before I left I increased her medication that seems to have helped. 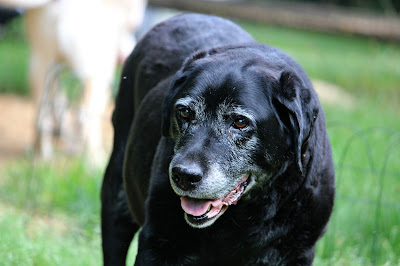 And of course I was and still am missing Hannah. 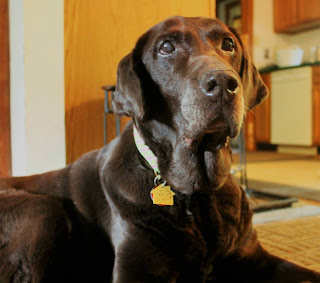 Leah, the new foster girl that we were supposed to get on Thursday, won't be coming to us. She is hypoglycemic, and had a diabetic seizure. So, the rescue has decided to keep her in the direction of Richmond, about 2.5 hours from us, with the vets that know her best. So, we wait for the cosmos to do its magic and bring us another pup that needs a place to call home.

I'm not in any hurry for that to happen. 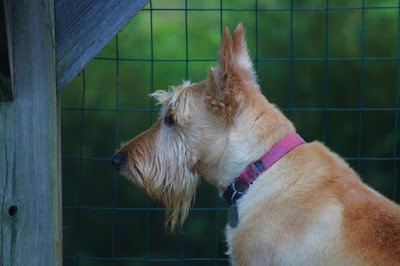 Just like I'm not in any hurry to go back to work tomorrow - Or make Leo, below, available for adoption again. But I have to do both.