A Forever Home for Sugar

I read recently that some bloggers view blogging as a sprint, rather than a marathon. I'm not sure about the sprint, but I do know I'm here to try and go the distance with my blog, no matter how far behind I get.  And right now, I'm really behind on keeping it updated and reading your blogs too.

Having said that, I want to tell you that our foster girl for Lab Rescue, Sugar, found her forever home a couple of weeks ago. I am never ready to let go of some of my fosters and Sugar was no exception. I felt a real connection with Sugar, and wanted to adopt and keep her. I'm not sure what kept me from going through with it.  Fate perhaps.

The senior couple that adopted Sugar, could not love or adore her any more than they do. The post-adoption updates have all been glowing reports about how much they love her and how well she's doing.  I did however mention to them several times that Sugar is a typical Lab, and will get into any food that is within her reach. And that she did. Sugar helped herself to an entire cabinet of food that included a box of granola bars, tortilla chips, bread and cookies -- I tried to warn them. She did end up with a pretty upset tummy. But she is fine now, and aside from that, I do think they are perfect for Sugar and I know she is where she is supposed to be.

But I do miss her. 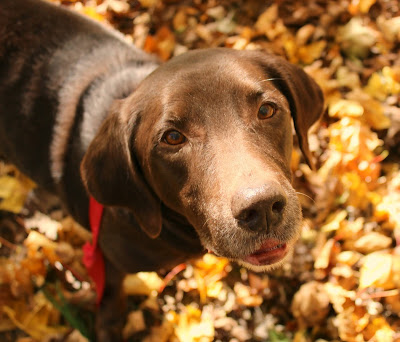 It's the holidays and I have a arms length list of things that are keeping me busy. One thing the past few weeks has been the arrival of Shelby and Jacket.

I was first asked to consider a hospice boy named Vaughn from the Golden Retriever Rescue. But a day or so later before he was supposed to come, there was a change in plans. The Foster Home Coordinator called and asked if we'd consider taking a 17 year old girl, named Shelby instead. Of course I agreed to the switch. A little later came another phone call asking if we would also take Shelby's brother from another Mother, a 10 year old Black Lab named Jacket. What's one more dog, right? So I agreed to that too. So, on Saturday, November 21, after traveling more than 200 miles, Shelby and Jacket arrived at Golden Pines.

This duo came from a shelter in southern Virginia. Their original owner had a stroke and the two were rehomed. And when that owner couldn't keep them, he took them both to the shelter - full of fleas and "other things" that dogs should never have on their coats and skin. Both were also not in the best of health, and have just finished antibiotics, and steroids. However, Shelby is still on doxycycline for Lyme disease and ehrlichiosis.

Shelby is absolutely delightful! I don't think she's 17 years old (an unheard of age for a golden) She has fit into the household and the routine really easily. All the dogs like her just fine. She's very overweight, and has problems getting to her feet and moving around. I've put her on a pain medication that has really helped, and she's willing to go outside on her own now, and doesn't need so much coaxing. Shelby is pretty picky with her food, but she loves green beans, so we're giving her plenty of those with her meals.

Jacket, or Jack as we're calling him is another story. He's about 10 years old, and is a really handsome Lab. He's eager for attention and friendly and does as we ask of him. He's also wonderful with Shelby and our girl Sophie. But Sunny and Charlie for whatever reason, he doesn't like at all and has attacked them both. He's not hurting them, (thankfully!) and the fights are easily broken up. But Sunny and especially Charlie being seniors, are easily knocked off their feet and do not fight back. Jack just has to see Sunny and he reacts to him. Because of that, we're not allowing him to interact with Todd at all, so we are keeping Jack separated from the group. As you can guess, Todd being a terrier is a fierce fighter, and I don't want to take any chances and risk him or someone getting injured.

Of course I am very concerned about all of this and I have my worries about Jack in the long-term as far as his and even Shelby finding a new forever home. But right now, I'm willing to stay the course and see where it takes all of us.