Here's our week in picture review .... 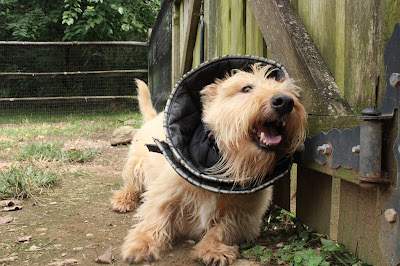 We cleaned it and put in medication. I think that made it worse. 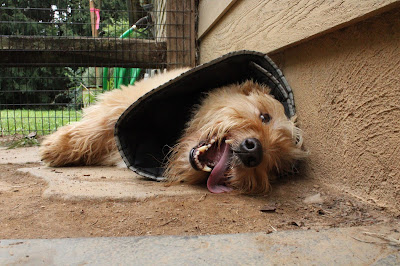 Monday - Off to work. Traffic is getting back to having pre-pandemic delays as people return to their offices and kids are back at school. 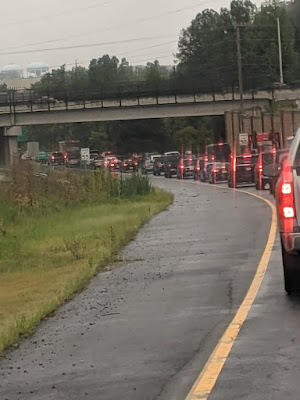 Tuesday - hornets, or yellow jackets, I don't know which, have eaten the few pears we have on our tree. We knocked the pears off the tree to try and get rid of them. It's a total loss of the fruit. 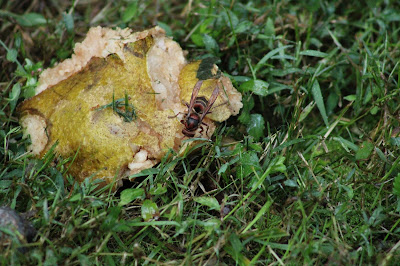 Wednesday evening - How I feel when my work week is over. 😊 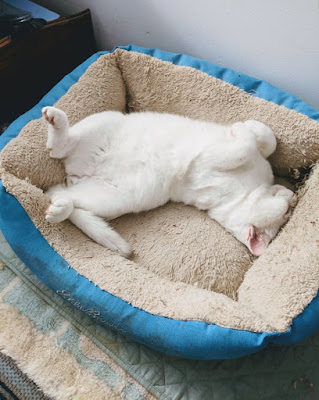 Thursday - Deer watching and just being outside. It was a gorgeous day. 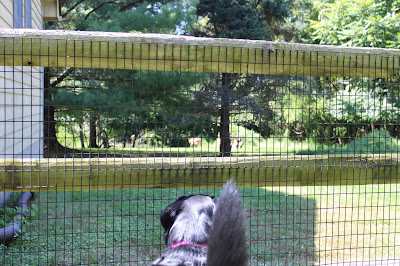 Friday - A really busy day. I left the house at 8:30 to get to the groomers by 9:45 with Todd and Jake. Max was on the list to be groomed too, but we decided that his hurt knee still needs a few more weeks. 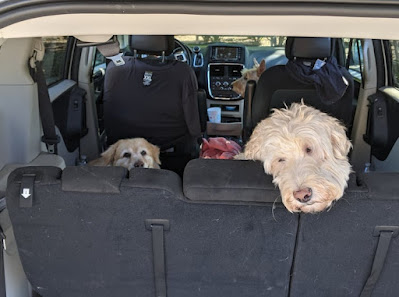 Jake has been totally transformed. Irina (our groomer) took more off of his coat than I wanted. But we talked about it, and she thought it was best. I totally trust her judgement. Jake's coat was so thick and so heavy and I know he will feel better, and not be so hot, even though the weather has suddenly turned cooler. 46° this morning. 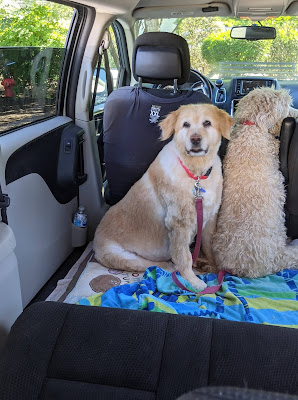 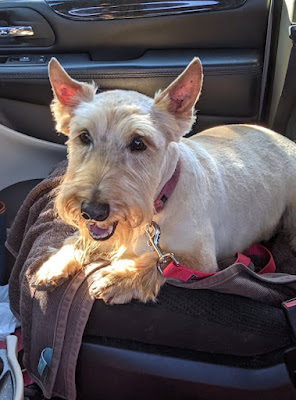 Saturday - Our day is just beginning. Whatever it brings, I hope yours is an enjoyable one. 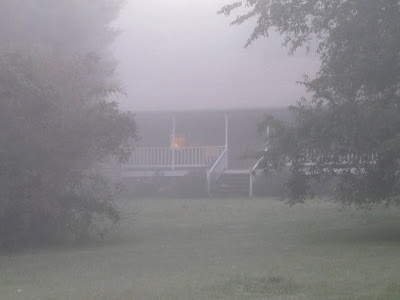 Life has been humming right along for us. So grab a snack, get comfy and I'll tell you what we've been up to.

Carl went to see family out of state, leaving me to be the single-dog-mom, which as you can figure, took a lot of time.

I did what I could to wear the dogs out, which involved walks and playing ball. Todd with his Scottie sized mouth, can fit two tennis balls in his mouth at once. 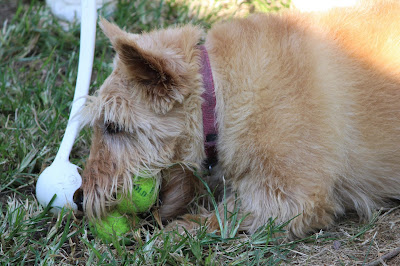 I've made the trek more than once to Mobile Vets office. First was our newest arrival, Jake. 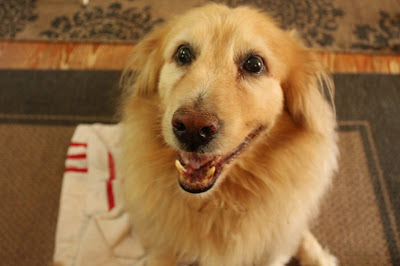 This big boy weighed in at a smidge over 100 pounds. He was really good at the vet, and all tests that were returned show that he's a healthy 13 year old boy. 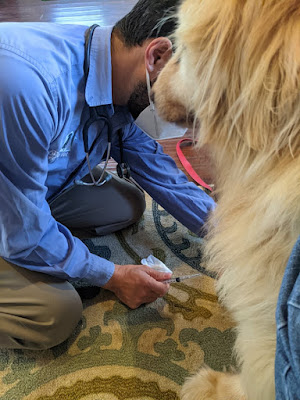 At home he's settled in really nicely. His pal appears to be Todd. They spend time outside together, barking at the deer, or whatever the two think needs to be barked at. I think Jake is having a good time. 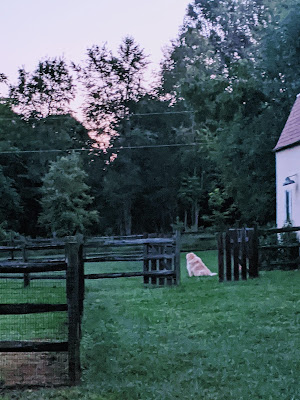 Our boy Max, who had two knee surgeries almost exactly 5 years ago, somehow hurt his knee. So, he's on limited activity. 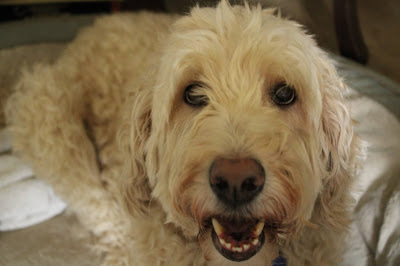 Bringing up the rear for vet appoints was Todd. His was just for his yearly exam, rabies vaccine and bloodwork. At 10 years old, it was a first for him to have senior blood work.

Our hospice foster girl Sheeba is doing well. Sadly, the cancer shehas is taking its toll on her appearance, and she's painfully thin, even though she eats enough for 2-3 dogs every day. She always barks at me when I am in bed, and then she stands there and stares at me. It occurred to me that she may want onto the bed, so I put her up on the bed with me. It didn't take long for her to fall asleep and start snoring. I guess it's what she's always wanted. Now she wants to be on the bed every night. ❤ Shedding season has also started, and it was Shelby's turn for a bath and an overdue brushing out. 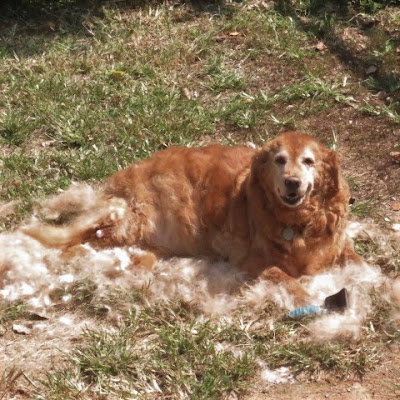 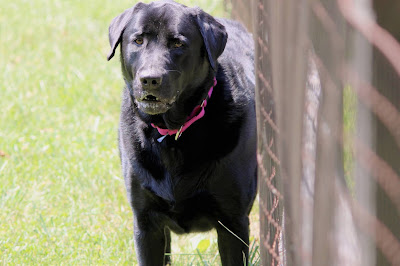 And George is the one that ended up with a bad upset stomach. Go figure. 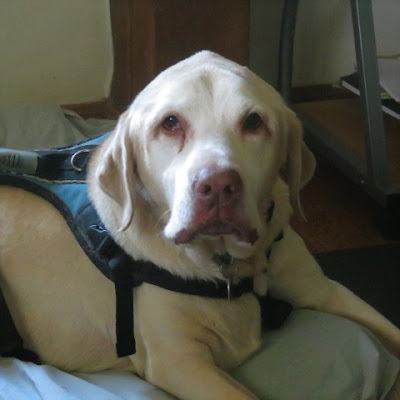 Our mailbox disappeared.... I think it got knocked off by a passing truck or something like that. 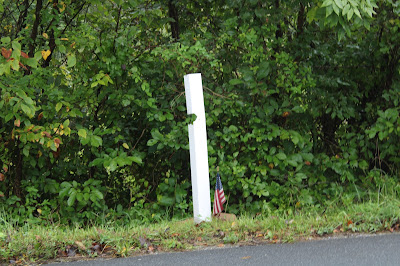 And my longtime and very dreaded nemesis, the dreaded Brown Marmorated Stinkbug has reappeared.  I have to say, they are one thing I could do without. 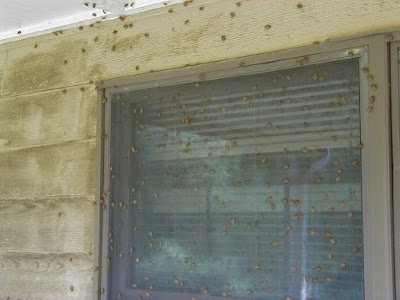 Whatever you're having to put up with or without, I hope all is well in your corner of the world. THANKS for stopping by! 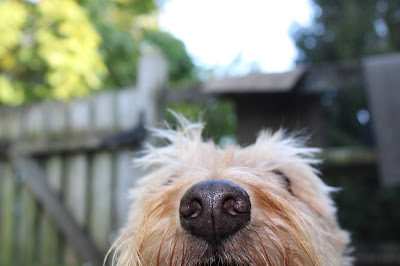