Every single year I make an annual pilgrimage to a German grocery store, named Aldi's and buy a German Christmas stollen. I'll confess, that I'm not a huge fan of them. But for more years than I can remember, my Mom always bought them and sent me a couple for the holidays. She really loved stollen and even kept a few in her freezer to have through the year, enjoying a piece with a cup of tea. So I do the same. I buy a loaf from Aldi's of the marzipan stollen, and have a piece with a cup of tea and remember her. It's a Christmas tradition. Do you have any Christmas traditions like this?

I hope your week is off to a good start! 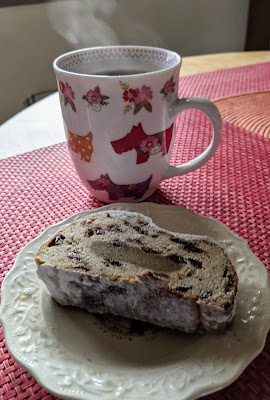 **For those who don't know what stollen is, here's a bit of it's story.

Stollen is a cake like yeast bread that usually has dried or candied fruit, orange and lemon zest, spice and cardamom spices for flavoring.  It is coated with powdered sugar or icing sugar and often containing marzipan. It was also called Striezel or Christstollen. Striezel is a word for loaf, and the shape of the bread along with being dusted with powdered sugar was a symbolic shape of the baby Jesus in swaddling clothes so it was also called Christstollen.

Dresden Stollen is said by some historians to have originated in 1329 as a result of a contest offered by the Bishop of Nauruburg. Bakers in the region produced a wonderful bread baked with the finest butter, sugar, raisins, citron and other specialty ingredients. The Bishop enjoyed the stollen so much that he ordered a quantity of grain saved for stollen only.

Stollen is mentioned for the first time in 1474 in the accounts of the Christian Hospital of St. Bartholomew in Dresden where it is referred to as a cake for the fasting period, consisting of only flour, oats and water as required by Church dogma.

Stollen became such a part of Dresdeners' lives that it was cut and served with special, stollen only utensils. It was also tradition that the first piece of stollen was set aside and kept to ensure the family would be able to afford a stollen the following year and the last piece saved to ensure the family had enough food for the year.

We Are Relaxed and Recharged 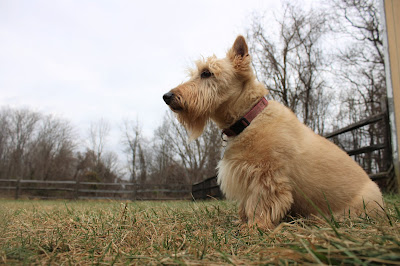 Well, after my last post about how bad I felt about everything, this past week could not have been more different than the previous one. Much like the weather has been from one day to the next.

With Hansel and Gretel gone, even getting caught in traffic on the way home wasn't a problem because I wasn't feeling the pressure to get home. 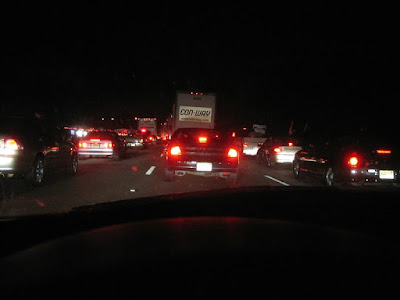 But I think the dogs were as worn out as I was.  The cats probably were too.

And, knock, knock, knock on wood, because of all of that, I've decided to really try to not take any new comers for now.

Having said that, back a couple of months ago, I agreed to keep a pair of foster dogs for the Golden Retriever Rescue over the holidays, which I think will be fine. They, Ginger and Charlie, were with us before, for a very short time, so knowing them already, I think (and hope) it'll be a quiet holiday for us.

Of course now that I've said that, that's probably what won't happen. But we can hope, right?

This past week was not exactly my best and I was not at my best.

On Monday, I'd gone into the hospital for what was supposed to only be for an "uncomplicated test" that even though required general anesthesia, I'd be out and on my way home by early afternoon. Well, at least that was the plan. That's not what happened. There was a small "complication" and the doctor thought it best to stay overnight. I was never, ever expecting that, and I was totally unprepared. I didn't even have a phone charger. Thankfully there were no complications overnight and I was feeling better and on my way home early Tuesday afternoon. I will add that the nurses were so nice, and did a wonderful job taking care of me, even if they did come in every 3 hours and woke me up to take my temperature and blood-pressure.

I don't even have to say that it totally threw me off. I went back to work on Wednesday, exhausted and my sleep-cycle totally out of synch. I did my best, but by Wednesday night and into Thursday morning, I was having a hard time keeping it all together and at home alone, I was barely hanging on. I had so much to do, and it needed to get done.

The needed respite came mid-morning when Lab Rescue contacted me and said that the kennel had boarding space for Hansel and Gretel. I was so sad to have to take them back to boarding.

I have really grown to love those two. And even though it was not what I wanted, it was what was needed. We tried to get them used to being around the cats, but that urge to chase and bark at them just couldn't be contained or controlled. We all really miss them. Especially Ree, who loved playing with them too. 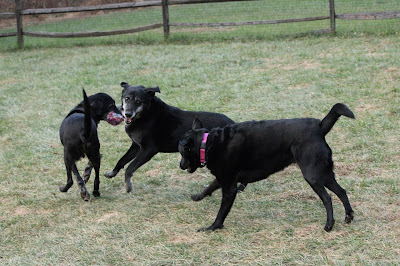 Jack and Shelby also had a yearly vet appointment, and by late afternoon, I was crying again as I dropped off Hansel and Gretel for boarding. I just kept going. I had to. My office holiday party at a local restaurant was Friday afternoon, and I was the sole planner and organizer for our office of 11 people. I somehow managed to get the last minute preparations all done and it was a nice party. 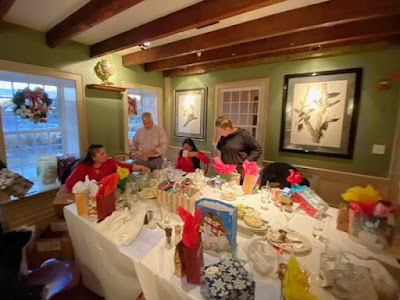 I'm usually one of the last to leave any event like this. But not this time. I was the first to leave. I came home got the dogs fed, and I was in bed by 8:30.

Today has been a day of napping and getting caught up. I still have one more day before I get to do the week all over again. It goes without saying that it will hopefully not be as complicated as the one that I'm grateful is in the rearview mirror. 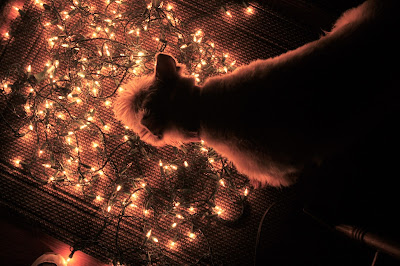