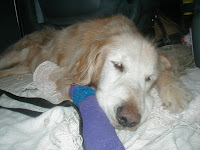 I've been saying for months that I was "done" being a foster home for the Golden Retriever Rescue. I've given the rescue 10 years which included four of them spent as the president. But because of the issues I was having with a board member over Tanner, it made me pretty determined to find another rescue to support. But I guess that fate had another plan this week...I was called on Tuesday and asked about picking up a dog that was at my vet. I had to go and get dog food anyway, and the vets office is right next to the shop where I buy the food--Added to that, the dog needed to be taken to another vets office for overnight care that was on my way home. I was hardly going to be going out of my way. The dog, Hamlet, has a bit of a sad story. He's about 13 years old, and was left and abandoned by his family when their house was foreclosed on. The story from the neighbors is that they had turned him out and he was wandering the neighborhood. The neighbor knew that the house had been foreclosed on, and thought that the family probably no longer wanted Hamlet, so he called Animal Control to come and pick him up. However, Hamlet still had his original collar on with an ID, and Animal Control contacted them. The owner came and picked him up from the shelter. I've found out that in our county that whenever a dog is picked up and the owner is identified, the county bills the owner for keeping them there and any expense incurred--I think they got him back because they didn't want to pay any of these "extra" fees. So when they got him back, instead of letting him outside, or finding someone to take him, they put him in the garage and left the house for good. It was several days before someone found Hamlet. He was left in the dark garage with no water or food...He was pretty ill with pancreatitis because he'd eaten trash left in the garage and was of course dehydrated--He'd thrown up the garbage and even part of a plastic fork! When I met him on Tuesday evening, he was so out of it and couldn't even stand or hold his head up. Needless to 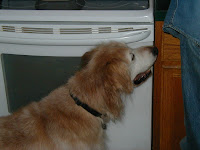 say, Hamlet's story got to me, and I agreed to foster him. Prayers were answered and by Wednesday evening Hamlet was ready to come to our house! The in

tros to our crew have gone well, and he's fitting in nicely. Hamlet is feeling much better! He's a typical senior Golden Retriever, easy going and always on the look out for a tidbit of something to eat--All good signs!! I've told several people about Hamlet this week and we all are a bit angry at this family for what they did to him. I just cannot imagine being so callous and uncaring--How could they just leave Hamlet in the garage with no food or water? Did they think that someone may not find him? I will never understand why or how someone would be able to do this--But I've decided it's best that I'm not able to, because that would put me on their level.
Posted by ~Kim at Golden Pines~ at 10:07 PM