A Forever Home for Patch

When I tell people that I foster Golden Retrievers for the rescue, it is not uncommon 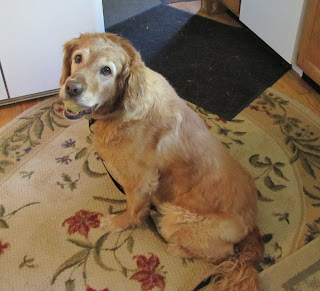 to hear the response that they couldn't foster because they would keep them all. While I know I've gotten good that, those of you who have fostered dogs know that there are some that come to you that are not a fit for your home. This was true of our foster dog Patch. (You may recall that he came to us in late April. He was given up by his owner because the neighbors complained about his being left outside alone for 14 hours a day).

Patch has many good and endearing qualities, but he did not particularly get along with our dogs. He never started any fights with our crew but he was always growling at them if they got too close to him while he had a tennis ball or another toy that he considered his. He would also growl at them when they had something that he wanted--I really think he had all the tennis balls in the house named. He seemed to know exactly how many we had and where they were and if another dog picked one up. Thankfully the 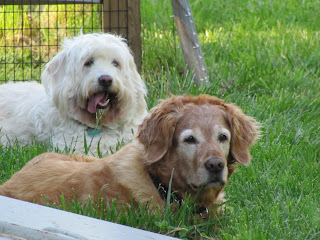 reaction from our dogs was the equivalent to rolling their eyes. They would drop whatever they had so he could have it. I guess they figured it was easier.

I know I could have kept Patch and just put up with his growling at the other dogs, but that would not have been fair to him or our dogs. What Patch needed was a home where he was the star and could have a family and toys all to himself. This is exactly what I found for Patch. The family we met with last week really fell in love with him and Patch and I fell in love with them too. They are perfect for him!

So, this morning, it was another 2 hour road trip down the crowded Capital Beltway, through the toll booths to take Pa 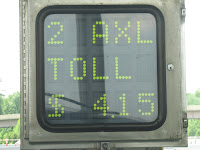 tch to "the family." Patch was happy to see them. He played with their 6 year old son, ignored the birds, and followed the Mom around the house. He hardly knew I was there; what was I saying about their being perfect? When I left they walked me outside to my van and at first Patch wanted to go with me. But the son called to him and Patch looked at him and then looked at me, and then back to Jack...I quickly said my good-byes, and Patch and the Mom walked back into the house--Patch was wagging his tail and unlike me, he never looked back. It was a sad moment for me, but it's how it should be. 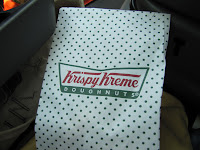 I now enter what I call "Foster Home Rehab" for Patch. To help me recover and let go of Patch, I get to make allotted phone calls to the family to find out how it's going. And to help with my emotional needs, I again stopped at Krispy Kreme and had 2 very fresh-hot-doughnuts and a Diet Coke.

When I got home the dogs were already celebrating Patch's being gone. Josh was carrying a tennis ball in his mouth, Charlie was laying in Patch's spot and Sheba (who had the hardest time with Patch) started singing my praises that I didn't have him with me--I guess I'm the only one that needs rehab.
Posted by ~Kim at Golden Pines~ at 6:06 PM