The Reality of a Christmas Myth 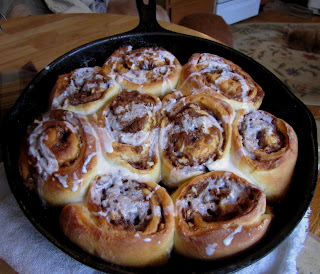 Christmas was a quiet day for us. Carl worked and I worked in the kitchen. I started the day by making cinnamon rolls in a cast-iron frying pan. The pan belonged to my Grandfather, and my Mom gave it to me more than 20 years ago. I'm starting to see more recipes using cast-iron, (the one for the rolls called for one) and I've even seen pans for sale at Macys. I'm wondering if like everything else, they are bringing back the old ideas and calling them new ones--They do that with everything else, so why not with cookware?
I'm sure most of you have heard of the Christmas myth known as "The Night the Animals Talk". Supposedly, on Christmas Eve, for a time, the animals can speak. My Mom told me about this many years ago and about how her numerous attempts to sneak down to the barn to find out if this was true was foiled by her parents.

This time of the year always brings this back to mind.  I have thought that it 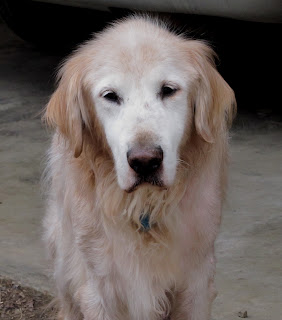 would be interesting to hear what our dogs and the cat would say if they could speak to us.  Yesterday I think I was given this chance.  The mornings for Hamlet seem to be the time that he is the most playful.  Christmas morning was no exception. He seemed to have a bit more of a spark as he pranced around me for attention. As I was talking to him and giving him pats and scratches, Hamlet quickly turned around and with a wagging tail, he looked at me and barked.  It was just a single bark and because I've never heard him do this before, of course I was a little surprised.  But just as the myth had said, I understood what he said perfectly.