The Stars Eddie and Todd

My week ended with a fun night out with a good friend, that began at a local restaurant.  I've only one word to describe dinner - Delicious!
After dinner, we went to see Eddie Izzard who is celebrating his book, "Believe Me."  In his trademark comedy style, he frankly and honestly recounted the highs and lows of his personal and professional life.  I was taken by Eddie telling about how being lousy at something didn't stop him from doing it. In fact, it often had the opposite effect, especially when it was something he felt strongly about; it drove him to work harder and to become better at whatever it was. A lesson to remember!   My friend has been a devoted Eddie Izzard fan for a very long time, and this was the second time I've gone with her to see him. And I have to admit that the show left me with an understanding of what's at the core of who Eddie Izzard is, and (Vicki) I’m becoming one of his devoted fans too. 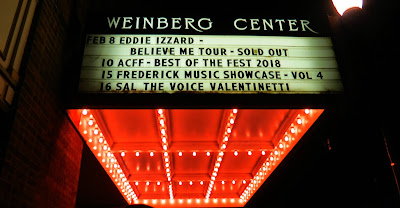 It was a late night, but it was an early start on Friday because it was Todd's turn to be the star.  He returned to the vet.
The staples in his neck have been removed, but his back-leg is still an issue. On Wednesday he started crying and holding up his leg again after he'd been jumping up. So, I made sure the vet had enough time to take a second look. But of course at the vet, he didn't show any signs of limping or favoring that back-leg.  My thoughts about what it could be and the vets are totally different because she's unable to illicit any kind of response when she examines Todd.  But he's been put on an anti-inflammatory medication for two weeks, and if that doesn't help, we'll take it to the next level of taking x-rays to try and figure it out.  Until then we're to keep him crated, and not allow him to jump up. 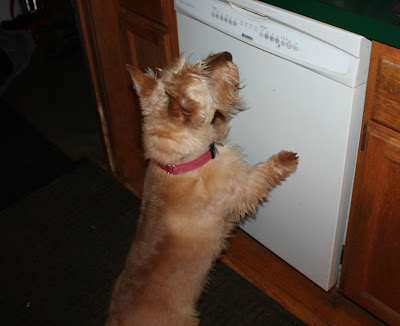 I think we'll be doing those x-rays. 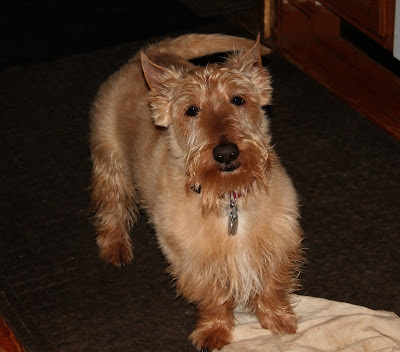