Our weekend begins with a new senior boy, a Goldendoodle, named "Alf."
Alf who we are estimating to be around 12 years old, was a stray or a lost boy in Baltimore Maryland. He has had a pretty rough week.  He was unable to really walk when he was at the shelter, was "depressed" and in the records we received, three times euthanizing him was mentioned.

He has an infected tooth and elbow, and what looks like a wire within a lump on his chest, he had fleas and a matted coat. But after a day or two on medications, he was feeling better and the rescue was asked to take him.

When we met on Thursday, Alf was able to walk, he had gotten a (really) bad haircut, the fleas were gone, thankfully, and he was exhausted.  Once at home, we didn't do any one on one intros because he fell fast asleep. Not even waking up for my brother or Carl coming home. 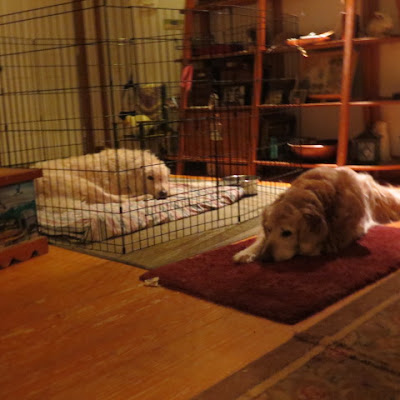 After his evening meal, he was soon fast asleep again.
When he was awake, Alf was tentative in our interactions and his eyes followed and watched everything that I did and they even seemed a bit puzzled. His world had been turned totally upside down so it's understandable.
No longer that "lost boy" three days later, Alf is a totally different dog with confidence. His eyes have softened, he's relaxed, and following me around the house and he's even a bit silly.  He's getting along fine with the other dogs, and just sits nearby and barks and wags his tail when we talk to him. I'd say that unlike Max, his personalty seems more Golden than Poodle.  He also loves exploring the yard and just laying in the grass.
Alf has a vet appointment on Monday afternoon. But given how he's acting today, maybe those health-issue-hurdles that he has to get over will be easier than we all thought. 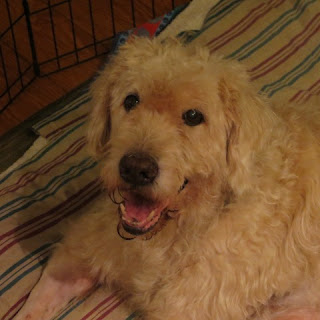