Thank you all for your thoughts about the path that Leo should take. You've helped more than you'll ever know.  By the weekend, I'll have an update about his new forever home. 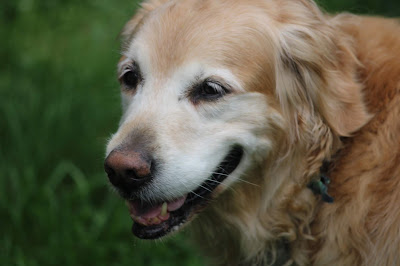 Until them, I want to tell you about two of our Lab Fosters, who have found their own forever homes in the last couple of weeks.

To start, remember the nearly 15 year old girl, Maya who came to us in early March? I didn't write much about her. She was mostly in the background, just going with the flow. A true gem, and I never thought that there would be anyone that would want to adopt her because of her age. Wrong!
Two retired police officers who live not too far from me, did. With 2 other Labs, Retired Police Lady had a dream of adopting a senior girl, and Maya was perfect, and they were perfect for her. So, she left us almost 3 weeks ago. Of course I miss having her with us. But she's doing really well, and has settled in nicely into her new life with her new family.
This brings us to our foster girl Hannah, who came to us in February. She was a stray from a West Virginia shelter. When she was turned over to Lab Rescue it was discovered that she is heartworm positive and has multiple mammary tumors. After her medical needs were addressed we were hoping that despite that she is "hospice" someone would fall in love and want to adopt her.
It turns out, that someone did, and that was us. We have officially adopted Hannah. Sure, there were calls from other people interested in adopting Hannah. But I managed to talk them out of her for one reason or another. I realized that I was doing it because my heart wasn't in placing her. Given how I feel about Hannah, along with her health, I just didn't think it was fair for her to make a change. So, Hannah is ours. And she is Lab-Rescue-Foster-Fail number 5 in 5 years. I couldn't be happier. 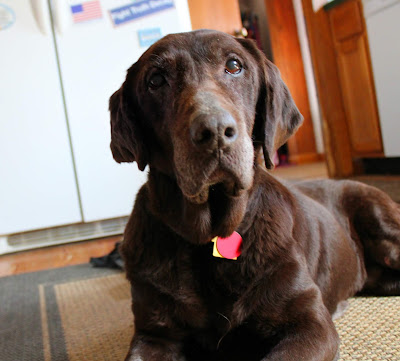