Good-Bye to Alf, Another Lost Boy

My week has been spent resting and recovering. I'm somewhat better, and the advice from my doctor is that if I'm not "significantly better" by the end of the weekend, I'm to return to the emergency room for more IV antibiotics.  I hope that won't need to happen....

Again, enough of me....  I must tell you about the loss of our beloved Alf in the midst of everything last week. 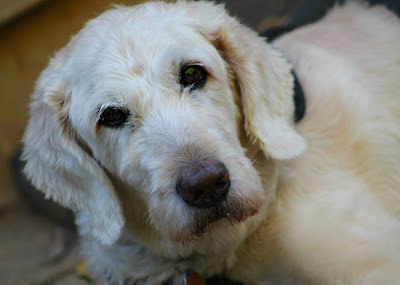 I knew weeks ago that Alf's health was starting to fail. But like that old car, we did everything we could to keep him up and going. For the most part, we were successful. It wasn't always easy, he could be a stubborn boy.

But when I was sick in bed, and his health also took a turn, I prayed for that tender mercy that would allow him to hang on a bit longer. Carl took great care of him until I felt a bit better to resume his care. I'd gotten him out in the morning and I was encouraged that he was up and around, and had a bit of an appetite. However, by the next day, despite several try's his strength was totally gone and he wouldn't stand. I knew he'd waited for me to feel better to allow me to be with him for the last of his journey.

Alf had truly been dealt a bad hand in his previous life. Found as a stray in downtown Baltimore, while in the shelter, it was recommended by 2 or 3 vets that this "lost boy" be euthanized because of his condition and health issues. However, he was turned over to the Golden Retriever Rescue, and the rest, as we can say, became HIS story (history?). 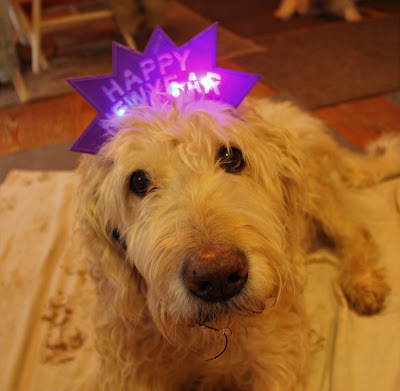 The little more than two years with Alf went too fast. So much has happened, and Alf, in the background was a witness to all of it. He wasn't a dog that liked attention and fuss. And when I read the definition of a curmudgeon as being a crusty, ill-tempered old man, I knew this was Alf. He could be grouchy, moody, and more than a little stubborn. 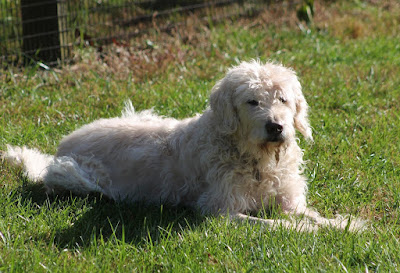 However, his head-butts to the back of my knees and his always wanting to be nearby spoke volumes and showed a gentle side of him. I knew he'd never allow me to hug him, so instead I would kiss him on his head, look into his dark brown eyes and tell him that I loved him. But I will confess to sometimes having a passing thought that he might snap at me for being in his space. But he never did. He knew my words came from my heart and I know how he felt in those moments too. Even now, thinking about them, brings out those tears and makes me miss him that much more.

About a week before Alf left us, I took the below picture of a rainbow-prism that was coming through the window as Alf laid on the kitchen floor. Given how he was feeling, I knew that his angels and the rainbow bridge were near.... 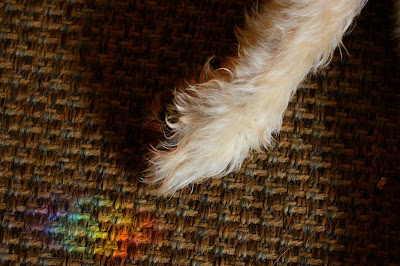 I think we've all heard it said that our four-legged family member stay by our side after passing away. The day after Alf left us, there were 2 prisms in the same spot. I found myself smiling and thanking Alf for that. I know that was him. I know he's nearby. I know he knows he meant something to us. 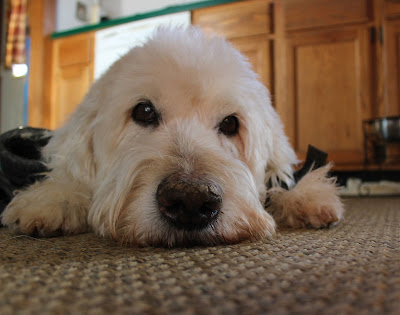 Alf's color for the rainbow is the green from in his collar. Green is said to symbolizes unconditional love and forgiveness. 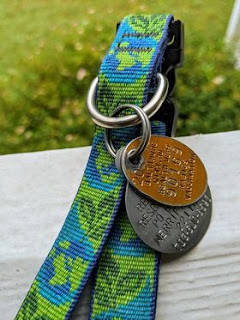 It's also said to be a healing color and I know that being a dog, he forgave the neglect and treatment in his first life. With us I think Alf, another one of our lost boys, found renewal, and harmony that I hope healed his heart and spirit.
God-speed Alf. You may be our 5th loss for this year but the ache and sadness of your loss is all its own, just as that place is that you have in my heart. I'm so thankful that you found your way to us and were part of our lives for two years and that I had the chance to know and love you, "my hot mess of a 'doodle!" 💓
Posted by ~Kim at Golden Pines~ at 11:49 AM