s Groundhog Day! The day when thousands of revelers converged on the small Pennsylvania town of Punxsutawney to hear a groundhog named Punxsutawney Phil predict the weather! Apparently the day grew out of a mainly German superstition that if a hibernating animal casts a shadow February 2--the Christian holiday of Candlemas--winter will last another six weeks. If no shadow is seen, legend says spring will be early.

Having a lot of confidence in this scientific method for pr

edicting the weather, but being unable to make it to Punxsutawney, we decided to se

e for ourselves if spring would come early or late. However, our resident groundhogs are all in hibernation right now. So, we opted to use the next best thing for our own Ground-DOG Day prediction, the dogs. When we had them out this morning, we tried in several different places to see if one of them would cast a shadow. No matter what they did, there was no shadow!! So it was official, spring will come early!!! 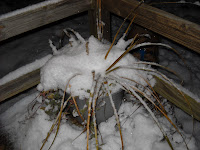 However, as we looked out our backdoor tonight it was confirmed that our dogs and Punxsutawney Phil are just as good of weathermen as the ones with two legs--It is definitely NOT looking like an early spring! Oh well...
Posted by ~Kim at Golden Pines~ at 10:04 PM