It's been a long couple of days. I would really like to thank everyone for your positive thoughts, comments and support on "Sam's Saga." It really means a lot to have your input and insight on this issue. I'm meeting with the family on Sunday, and will let you know what happens. 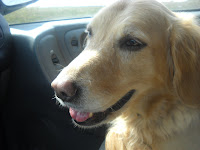 I really needed some "alone time" today and with our internet connection having problems I thought I'd just leave Carl to do his own thing and take Rudi for a drive. We drove over to Harpers Ferry West Virginia which is about 40 minutes from where we live and is situated on the banks of the Potomac and Shenandoah Rivers where Maryland, Virgi 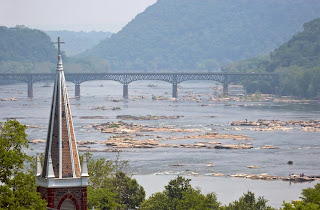 nia, and West Virginia meet. Harpers Ferry is best known for John Brown's raid on the Armory in 1859 which brought national attention to the emotional divisions concerning slavery. As you can see, it's really a beautiful place, especially in the summer, we love to spend time there!

I remembered that we needed some bird food so I stopped by the "Petco" in the next town over called Charles Town. I took Rudi inside with me. She's usually pretty good when I take her places, but Rudi being Rudi, she

bores easily and starts to act up--She didn't disappoint. When I was standing in line to check out, I noticed a well dressed older couple standing in back of me with a bag of two goldfish. Rudi was starting to get restless and started playfully barking at the man holding the fish who in return gave me a stern look of disapproval. As I was paying, I felt Rudi jump up and I turned around just in time to see that the bag that held the goldfish had 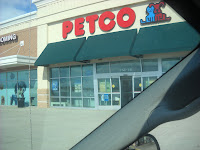 a hole in it and there was water everywhere! I was given a look of disbelief and astonishment that was accompanied by something said by the couple and the cashier that I can't even remember--I quickly finished paying and Rudi and I made a quick retreat over the border and back to Virginia.
Posted by ~Kim at Golden Pines~ at 11:00 PM