What to do About Sam?

I know I've already posted today, but I don't t 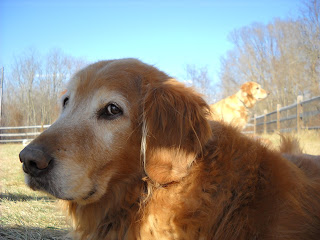 hink there's a set rule that I can't post twice in a day, so I'm going to just because I need to unload something that of course it involves one of the dogs.

Believe it or not, one of our dogs is not from a rescue...At least not in the sense that our others are. His name is Sam, and we guess he is about 8-9 years old. He came to us last August from a family we know from church. He has a bit of mysterious past, and we call him "Sam the Spy" The family that we got him from had only had him two years. His life before that is unknown. The story I was told is that the Husband who works for "a Government Agency" came home one day with him. He told his wife that Sam's owner "was gone" and Sam needed to disappear. The wife said that she knew better than to ask any more questions -- But she really felt that "Sam" was not his name at all because he didn't respond to it. It's anyone's guess what it could be!! I have joked that some night I'll be sitting with him and say something off the wall like "Kwasimoto" and he'll go crazy!!

Whatever his past was, and whatever Sam is not telling us, he's really a nice dog! The family gave

him up for several reasons. One being that they just didn't have time for him. Another was the health of "the wife." She was diagnosed with cancer and just felt that Sam was a bit too much to take care of along with a job and active young children. They also had to move out of the home they were in, into a smaller home in a subdivision that just happens to be around the corner from where we used to live. But they felt that they weren't going to have room inside or out for him. The family had thought about turning him over to the Golden Retriever Rescue. But they were on the fence about giving Sam to rescue and I thought it was only because they wanted to know what happened to him, and wanted to make sure that he had a good home--At least this is what I was told by the wife. But this is how I entered the picture. The wife contacted me, because they knew we had Goldens and asked if we would take him--Of course we said yes, and promised that he'd be loved, well cared for, etc. I know the kids were (naturally) upset about giving him up, but I told them they could come anytime to visit! I've kept up with them via Facebook and sent a few pictures telling them how he was doing. They've never come to visit, or initiated any contact. ...

Well, guess what has happened? Yes, they have asked if they could have Sam back. I find myself really torn about it. I have to ask, what has changed that all of the sudden th 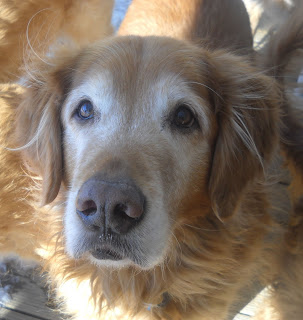 e issues that they said kept them from keeping him 6 months ago are not problems six months later? How do they suddenly have the room for Sam? How does the Mom all of the sudden have time and energy for it all given her health concerns? I also have to ask myself why didn't they love him enough when they had him to try and make it work and keep him? I don't understand--I would do anything for my dogs, and that includes doing what I can to keep them; but that's me. I did hint around about my concerns, but the husband only told me that they felt that they could now make it work with Sam~~Just as a caveat I'll add that a friend of mine told me that we don't "legally" own Sam because we never signed a formal agreement. Even though I should know the laws of dog ownership in Virginia because of the rescue, I have to admit that I do not.

I know it goes without saying that we do love Sam. He's a terrific dog--Whatever he has been through, it hasn't kept him from being a confident, friendly and outgoing Golden. But it took several weeks for him to get used to living in a "group home" and being with other dogs, as well as a whole new routine. But Sam has settled in and does seem happy and of course he seems to have made a connection with Carl and I and has found his place in the pack.

I know that we have so many Goldens here, and maybe one leaving us shouldn't be such a big deal and they are a good kind family. But despite knowing his, it doesn't keep me from being torn, and having doubts about them and not knowing what I should do...Is it selfish and wrong to want to keep Sam and know for sure that he is happy and okay? I worry that if something happens and they decide they aren't able to keep him that they may not contact me again even if I made them promise they would. What a dilemma and what's the right thing to do?
Posted by ~Kim at Golden Pines~ at 9:42 PM