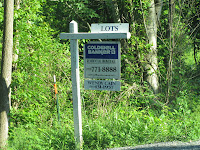 With my 'milestone birthday' behind me, we had another 'celebration' here at Golden Pines.  Some of you may recall that back last fall I was upset when the property behind us was put up for sale.  A couple of attempts by us to purchase part of it from the owner were turned down.  While the property was priced well with the current market, over the last 6 months we've noticed very few people looking at it.  I was contacted by our Realtor on Monday and told that the property had been 'withdrawn' from the market and yesterday the sign was taken down. I have to admit that I'm relieved that it didn't sell.  But the owner is a Realtor, and so I know at some point the property will once again be put back on the market to be sold.

CarrieAnne decided that she wanted to celebrate on her own and so she went for a private swim.  The water level must be up after the rain from this past weekend.  She returned very happy! 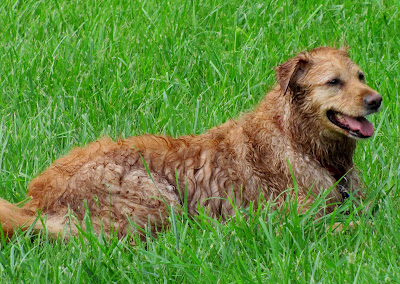 The celebration was short lived however because as we were getting the dogs in the house, Carrie was nowhere to be found.    We looked for her for almost 2 hours.  I called and called, and blew the whistle for her to return, but she didn't come.  I asked Carl several times if he checked the house for her and he assured me he had. This was so unlike her because CarrieAnne always, always comes when she's called...It was starting to get dark and so we came back into the house and when I came in I called her and there she was--She'd been in the house the entire time.  Once again, relief and celebration and the reminder to never ask Carl to find something for me! 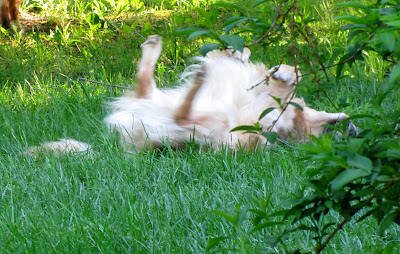