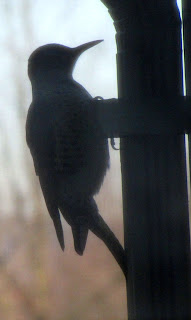 I'd really hoped for the chance to sit and relax and enjoy my Sunday afternoon.  Unfortunately, that didn't happen.  I was sitting at my computer when I heard the Todd barking outside.  It was a high pitched non-stop bark that I don't know that I've heard from him before.  Figuring it was probably nothing, I sent Carl out to see what the commotion was.  A couple of  minutes later, he came inside with Sheba, covered in blood.  Carrie was behind her with blood on her as well. The two had gotten into a fight.  Sheba had a large wound on her front leg that was laying open.  She let me wash the debris off, and I then went to check on the other dogs.  Todd was continuing to bark, and I was concerned that he'd been part of the fight too.  Thankfully he was not.  Carrie's wounds were superficial and didn't require much more than being washed off.  So I put Sheba into the van and took her to the animal emergency.  Almost 3 hours later, we left with Sheba having staples on her face, and leg.  She has other wounds that will only need to be kept clean. 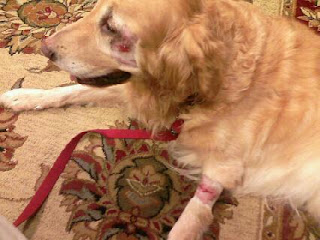 This morning they were still tentative around one another.  I left Carrie in her crate all day and this evening they are fine. You may recall that this is not the first time that Sheba has started a fight.  A friend of mine suggested that I think about re-homing Sheba.  Needless to say, I don't know what to do. There's a lot about this that continues to tumble around in my head.  But thankfully I don't have to do anything for now, except let the mending begin for all of us.
Posted by ~Kim at Golden Pines~ at 9:16 PM