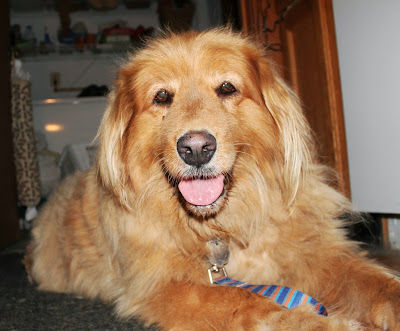 Well, we've had Sunshine come to Golden Pines this week, why not a Comet too??  That's exactly what has happened.  This week I received an e-mail from Annie's former vet about an elderly lady who no longer wanted or was able to care for her nearly 13 year old Golden, named Comet. I sent the e-mail onto the rescue I volunteer with, but I couldn't stop thinking about her. Comet has lived her entire life in an outdoor 6x9 pen and has never lived indoors (while another family dog lived inside, in comfort).  But with our record temperatures and sweltering heat, all I could think of was how miserable Comet must be. I told the rescue that even though she couldn't stay with us, I would keep her until a foster home could be found.  Arrangements were made, and Comet arrived yesterday afternoon. She is very, very overweight, very dirty and very smelly, and was very happy, until ...

...the initial meeting with our dogs...It did not go well.  As you know, our dogs are old pros at meeting new dogs, and this was nothing different than they'd done earlier in the week, and many, many times before.  But there was a lot of growling from Comet, and I of course worried about a fight starting. In all fairness to Comet her world that she has known for nearly 13 years had been totally turned upside down.  I knew that she was stressed, hot and confused.  I blocked off the kitchen, and got her inside to cool off and settle down.  Throughout the evening the dogs looked at her through the gate and I let Comet meet some of them individually and the cat too. (I'll just add right here that CC is always a good sport about my dropping her at a safe distance in front of an unknown dog to see what will happen--It's not the first time she's been used as bait, and I know it won't be the last). 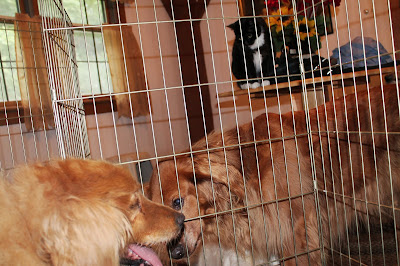 At 3:30 this morning Josh had to go out, and Wendy decided she needed to as well, I just opened the gate and hoped everything would be okay.  A quick sniff was all that was needed, everyone was fine.  Now that we've gotten over that hurdle I can admit that I find myself very taken by this sweet old gal who can't stop smiling and wagging her tail.  I wish she could stay so I could show her the world she has been missing her entire life.  But she can't.  Someone else will be doing that, and it will be a good friend of mine who also fosters the senior Goldens. Comet is going to be just fine. 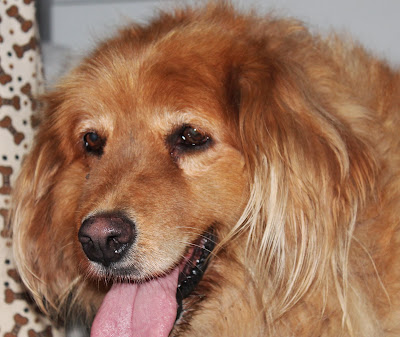