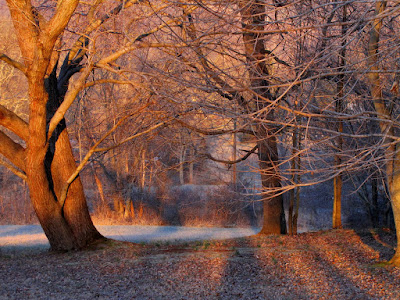 Our week has been going full speed as the wind howled, and we saw our very first snow flakes.  Here's a rundown of our week so far...

Sheba, must be having some kind of mid-life crisis, is that possible for a 11 year old dog?  She has never, ever, chewed up anything, until this week.  She developed a taste for a plastic flyswatter, and ate practically the whole thing while I was at work one day.  At first, I didn't think it was her -- Josh, yes.  Charlie, he's done it before.  Todd, no, he was in his crate.  But when she vomited some small pieces of it, that gave it away.  She also decided to chew up a cat toy, and a book that I caught her with.  I'm not sure what to make of it.  (So far, Sheba is okay, and it appears that everything was chewed into small pieces and is "moving through" just fine ).
Onto Sherlock/Reggie.  He was back to see the drill sergeant vet for a follow up appointment.  The vet quickly examined him, said she thought his range of motion had improved, called to the assistants to draw some blood, asked me about medication refills, told me to she wanted to see him in six months, and to wait in the reception area -- All in one breath...
Moving on to Dusty...  He also had a visit with the vet.  I've been discussing with the medical coordinator of the rescue his overall health, in particular the tumor that he has on his back leg that continues to grow in size.  Right now he's in a good place in how he feels, and how connected he is with the daily routine of the household -- A big switch from what its been previously.  The board of the rescue voted to allow him to stay with us as a "long term foster."  This means he'll remain with us the rest of his life, and they will continue to pay his medical expenses.
Flurry the kitten is still with us for a few more days.  His perspective adopter couldn't make it to come and meet him last weekend. 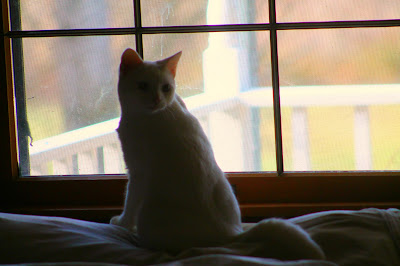 This takes us to Todd.  A couple of times this week deer have taken to jumping our 5 foot high fence, and grazing in our yard.  It goes without saying that Todd won't have any of that. 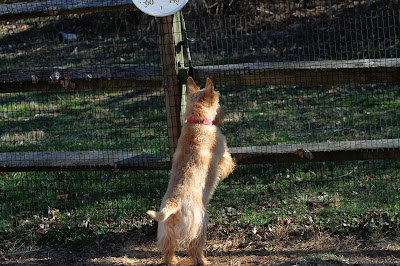 So, he's been religiously patrolling it to fend off those would be trespassers. 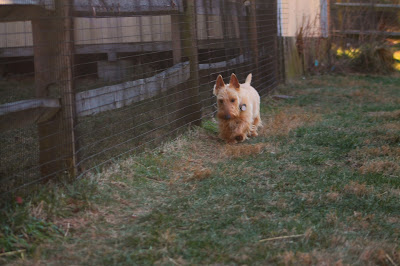 He takes that job very seriously.  But of course there's always time for play too. 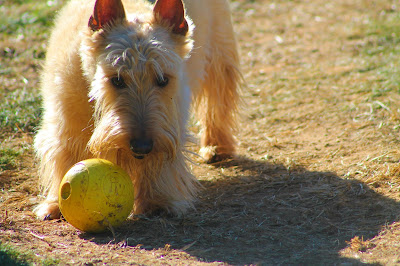