A Favor for Ginger and Ziggy

If the two weeks prior were a storm, this past week has been the calm. 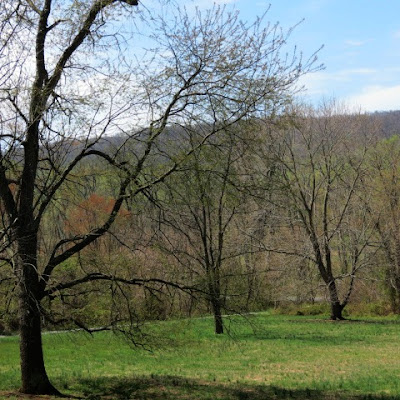 Spring is finally coming, and the spring flowers are blooming everywhere.
Easter that seemed so far away is now just around the corner. 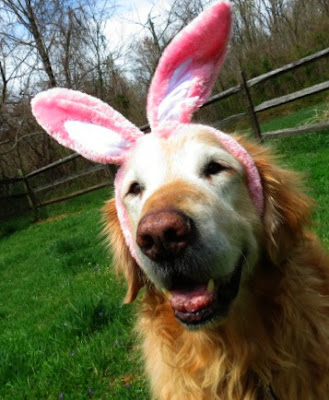 As I was leaving lunch on Thursday with a couple of friends, I got a message from another friend who lives nearly 2 hours from us. Her 85 year old friend, Ginger, had a sick 30 year old (!!) African Grey Parrot named Ziggy that was being cared for at a nearby vets office. Ginger was understandably really worried about her and was unable to drive herself to even see Ziggy, (who was brought to this particular vet by someone else). Ginger was told by the vet that Ziggy, who was now on medication and feeling somewhat better could come home if she'd just eat on her own. Ginger was sure that if Ziggy just had her favorite food that the vet couldn't (wouldn't?) provide for her, it might just do the trick. Ginger was feeling really depressed and defeated because she knew of no one to ask for a favor, and so asked my friend if she did. THIS is where I came into the picture. My friend knew it was a lot to ask, but she wondered if I wouldn't mind going to the grocery store and buying for Ziggy, 2 RED apples, RED grapes, and 1 banana all of which are her favorites and taking it to her at the vets office, adding that they would pay me back for the gas and the fruit. Of course I said I would and told my friend that if they gave me anything for what I consider a small favor, I'd be insulted. So off to the store I went, and I dropped it off, also hoping it would tempt Ziggy to eat, and happy that I was able to help someone out. 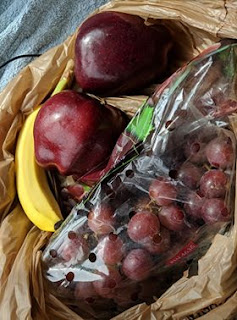 My friend sent me a message telling me that Ziggy immediately ate some of the fruit. And today I received another message that Ziggy was able to come home! Adding that Ginger is so happy and that the first words Ziggy said to her were  "Are you hungry? At hearing those words, Ginger said she cried. She was even cleaning her feathers, which Ginger says is a good sign. Ziggy, who she has had since she was a very "young chick" now has special food and meds for a liver issue and all are hopeful she will be okay.
At the moment, we're all "okay" too. It has been a pretty good week for Bailey, (in the middle below) as well the others as I opened up a new 12 pound box of dog-treats today. For us, it's of course more cost-effective to buy them this way and I'm grateful that the shop where we buy their food will special order them for us. 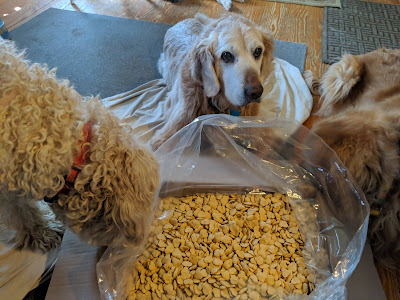 And I was sure to give a few extra to Rhett who was a good sport and let me put the ears and petals on him to take a few "seasonal" photos. 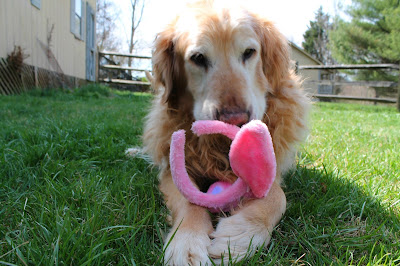 Todd is enjoying the seasonal change and is really enjoying spending more time outdoors.  If spring has come to your corner of the world, I hope you are too! 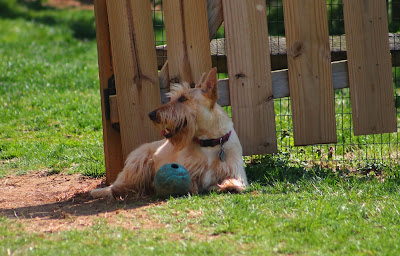