You all know me too well, and are great guessers!!  YES, it was TANNER who caught my eye on the list of dogs looking for a foster home and we were asked to foster! He arrived a week ago this evening.

Tanner was a stray from a shelter on the eastern shore of Maryland.  Found in late July, he was covered from head to toe with fleas and ticks.  He has a skin allergy caused by the fleas and is missing about half of his coat. He needs weekly baths with a medicated shampoo to soothe his skin and help it to heal. He's on several medications, which is really helping as you can see in the photos.
Tanner is estimated to be between 8 to 10 years old. I would guess he's probably more like eight.  He has great energy, and loves attention.  He's getting along really well with all the dogs.  The cats are an irresistible curiosity for him, and so we watch him closely around them.  He doesn't chase them, he just seems very interested in whatever they are doing; which usually isn't really anything.
It's anyone's guess how this nice and easy going boy ended up as a stray. Tanner knows all about being in a house, he loves to sleep on the bed, and knows all about tennis balls and the kitchen. He has a tender heart and spirit, and puts his head down when we tell him "no." So, we're careful to not hurt those canine feelings in teaching him the rules of the house. Tanner was also microchipped previously, but the information was incomplete, and led nowhere.  A reminder to make sure your pets 'chip information is updated!

We're glad Tanner is here and we are enjoying getting to know him. Soon, the rescue will make him available for adoption, and the search for his forever home will begin. 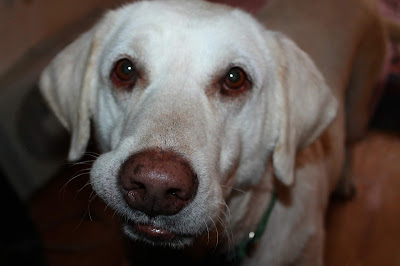