Saturday was the day I arranged to get George picked up from Paul's brother. I really wanted to make it easy for the brother, so I drove over an hour to get there, to an area of Maryland that I'd never been to before.
George was happy to see me, and wouldn't stop barking. In fact, for the first 20 minutes of our drive home, all he did was bark and shove his head under my arm. It was really good to see him!  ...not so much to hear him though. 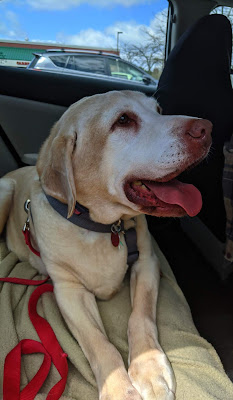 Unfortunately, about 20 minutes into our drive home, I had car/van trouble again. It was the same issue I'd had in February.  Not knowing the area, thankfully I was able to make it to a shopping center, I'd passed on my way to pick up George, where I was able to safely park. Having done this before, and because we have an "extended warranty" I called and a tow truck to take my van to a dealership closer to home was arranged.
I will fast forward through the snags caused by the (less than competent) man I had initially spoken to, because the next person on the phone was totally sympathetic, and helpful (she could hear George barking) and she solved those issues for me. Carl and the tow truck showed up at about the same time and six hours later, we were safely home. What an afternoon! 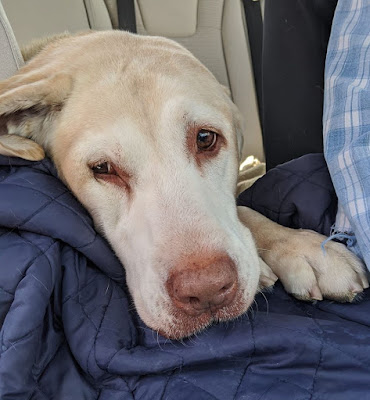 I read recently that dogs have associative memory, remembering people, places, and experiences based on their associations they have with them. I totally believe that. George has settled right back in, even remembering where he used to eat, and I'm so glad to report that he's not barking much at all. 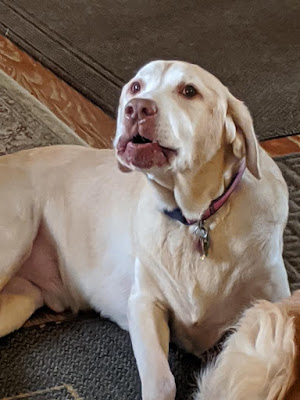 So, whatever is ahead for George -- Lab Rescue has said they'll help to find him a new home if needed -- George is going to be just fine. 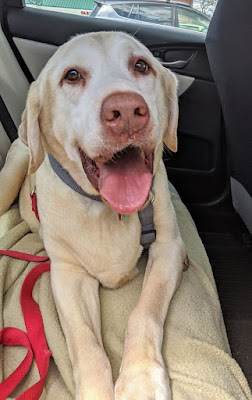 Welcome back George!
Posted by ~Kim at Golden Pines~ at 11:54 AM