We have been keeping a secret here at Golden Pines for several weeks now.  The secret? We are getting a puppy! No, it's not a Golden Retriever (a shock I know) but a Scottish Terrier! 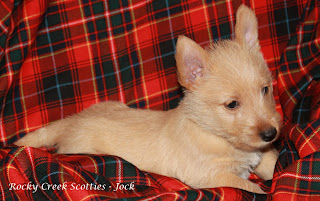 Just over a year ago, I became acquainted with 'Lynn' from the blog Rocky Creek Scottie Adventures. Our cyber friendship began when Angus, at Wilf the PON Discovers France posted about our both losing 4-legged-family members, Java and Cowboy, on the same day. Lynn sent me an e-mail and a friendship began. We marveled that a blog in France would introduce the two of us who both live in Virginia.  (Thank-you for that Angus!!!)
I've known for a long time that I wanted to get a puppy. And I knew that if and when we added one, the timing of it was really going to be important.  I also knew that for several reasons, I didn't want the puppy to be a Golden Retriever. Because of Lynn and her blog, I became smitten with Scottish Terriers and started to do more reading about them. It didn't take long to realize that I wanted to add a Scottie to our household. When Lynn told me that her girl, Carrleigh was expecting a litter in April, the timing seemed to be right.
This week, I picked the puppy, a little boy, whose name was Jock, and we have re-named Todd. Being a 'sentimental old lady' I will tell you in another post how and where this name came from. But 'Todd' will be coming to Golden Pines in about a month. Carl and I are of course really excited!
I know some of you may be wondering why in the world we would want to add a puppy when we already have so many dogs. The answer is a very personal one that has to do with knowing that the loss of some of our dogs will be coming way to soon. Last year, we said good-bye to three of our pups, not including Doris's boy Sam. With our dogs getting older, I feel this need to 'bridge that gap' and begin a new generation. I feel strongly that there's nothing like a puppy to liven up a laid-back quiet crowd, especially a spirited Scottish Terrier!!


(The picture below are the little boys, 'Todd' is the one on the far left) 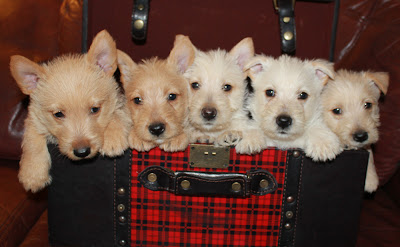 I hope you'll take a moment to stop by and meet Lynn and her crew at
Rocky Creek Scottie Adventures,
and Angus at Wilf the PON discovers France.
Posted by ~Kim at Golden Pines~ at 8:30 AM