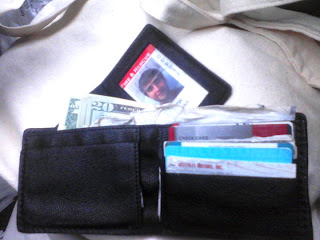 On Monday on my way to work, I saw something in the road that at first I thought was something that had been hit by a car--As I passed it, I glanced down and saw what I thought looked like a wallet. I turned the van around, and went back for a better look. It was indeed a wallet. I picked it up and even though it was soaking wet, there was a little more than $80 in cash, a credit card, drivers license, all the usual things. The wallet belonged to a young man who was 19 years old, and had just celebrated his birthday on Sunday. Off the drivers license I was able to get the address which led me to a phone number and I called and left a message. At the end of the day was a call from the grateful father of 'Andrew' who had lost the wallet. He said before they got my message they had been out looking all down the road trying to find it. Andrew was a little frantic at losing it. They didn't live far from me, so I offered to drop it off on my way home from work.  I met a relieved and very grateful Andrew along with his dad, who thanked me several times and even offered me a reward. Of course there was no way I was taking a reward and I told them I was just glad I was able to return the wallet and its contents to the owner.


Tuesday morning when we had the dogs out, we lost track of our boy Josh. Josh at 9 years old is just now being trusted to be off lead. However, we always keep a really close eye on him because he will wander off and that's what he did. It was a moment of panic when Josh didn't come when we called him and he seemed to have disappeared. We decided to get all the dogs inside and go out and look for him. We had just gone back outside when a truck pulled into our driveway. The driver got out and so did Josh! He'd seen him on the neighboring field, called to him and he came. He looked at his tags and realized where he belonged and brought him back. I was so very grateful that he'd found Josh that I offered him a 'reward' for his trouble, but he told us no, that he was glad to be able to bring Josh back to where he belonged. I thought later Josh's being returned was kind of like the wallet, both owners relieved and very thankful for the kindness of strangers. 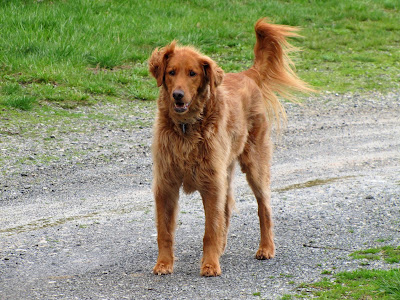 Finally, again I am grateful and so appreciate for all your good thoughts and prayers for Hamlet.  He's doing well, and there are no changes--The below picture was taken on Saturday where he's doing what he always does, taking everything in stride. 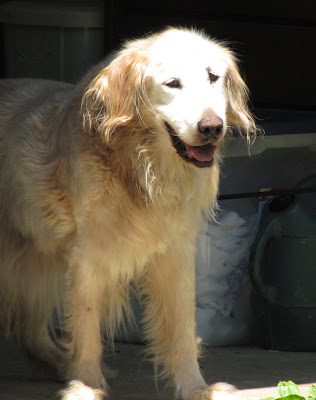