Back after a week away, and I wish I could say we were away on a fun trip.  But actually, I've not been feeling well for almost a week.  I'll admit that I don't make the best sick person.  I've come home from work, worn out and just fallen into bed but not before I complain, moan and groan.  The dogs are sympathetic, but even they just got to the point where they ignored me, except when it was dinner time.
Not feeling well must be contagious.  Buddy (below) has also not been feeling well the past couple of weeks. He's getting sick after eating.  You name it, I've tried everything from changing his food, to the bowl height, and medication.  None of it seems to make a difference -- He still gets sick, and there's no rhyme or reason for it and no way to predict that he will or won't. When his regular vet wasn't working, we saw a new vet that is just starting her veterinary career. I have to admit, that I felt that she was no help.  So, I've made an appointment for our regular vet to see Buddy on Saturday. 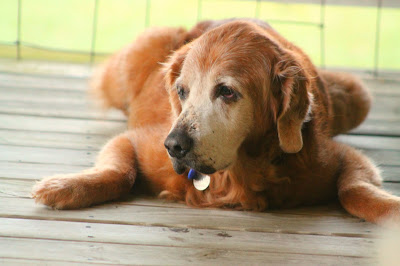 What was I saying about being contagious?  Our new comer Dusty isn't feeling well today either.  I've no idea what it could be.  He was just fine yesterday, but today he's refusing food, and won't get up.  Thinking that it could be pain from overdoing it yesterday, I've given him pain pills today in hopes that he'll feel better by tomorrow. He also has a vet appointment on Saturday.
Todd is totally oblivious to everything that's going on inside.  This morning he didn't come when called for breakfast -- He was much too busy running around the yard barking at the gangs of delinquent deer and rabbits that are trespassing on his turf! 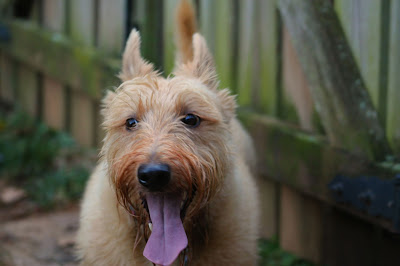