Part two of our weekend came on Saturday when things got bumpy. You may remember that I'd agreed to foster the pair, Abe and George before Sadie came. But they got sick, so that was the end of their coming to us. At least that's what I thought. Well, they popped back up on the radar again. After they were feeling better, they went to another foster home who quickly returned them. So when Sadie went to her new home, I was asked again about fostering Abe and George. They were in boarding and the foster home coordinator really wanted them in a home setting.
So, I met Abe and George up on Saturday. High drama ensued, because both dogs were so wound up, okay, they were crazy, because they were so excited to be out of boarding and to see each other. I had to call Carl and ask him to make a 40 minute drive to where we were to help me get them home in seperate cars. Once home we let them explore the yard and play together until it started to get dark.

We brought them inside, and put them in a large-ex-pen and George started barking. For about 5 hours he barked. Nothing we said or did could get George to stop. Both dogs finally settled down around 10 o'clock. The barking started again at about 2 o'clock in the morning, continuing until around 4. I've no idea what George and sometimes Abe were barking at. So, needless to say we were all exhausted, tired and worn out, and yes, I was stressed out. I contacted the foster home coordinator and she made a couple of great suggestions, one involved medication, and that did the trick.  And that made Sunday a very quiet day as all of us caught up on missed sleep.

Despite that rough start, both Abe and George are nice dogs. For obvious reasons, I've nicknamed them "The Barkalot Brothers." I think it fits.
Of the two dogs, Abe is the more outgoing and curious one.  He's diabetic and needs insulin injections twice daily. He is also mostly blind from cataracts. But that doesn't stop him, Abe is totally engaged in what's going on and wants to be part of it, especially if there's food. He's good natured, and his tail is wrapped up because he has "happy tail." **Happy tail is also known as kennel tail when a dog whacks his tail hard enough on a hard surface that it causes a cut or split on the end of the tail.
George, the more vocal of the two has problems getting to his feet. He is equally friendly, a bit more laid back and silly and all that comes with his not being afraid to let us know his opinion.
So far, they are fine with our dogs, ignoring them and the cats. That of course, suits Todd 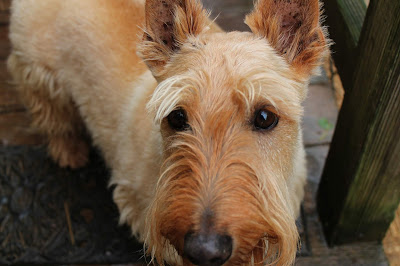 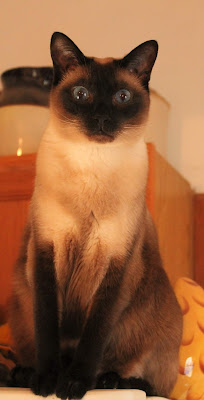 Welcome to the Barkalot Brothers! 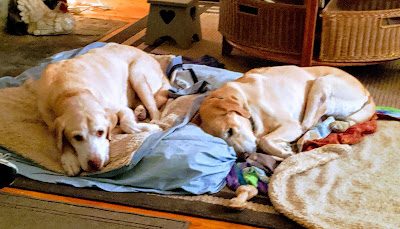