Well, you all were right. It didn't take long for us to get a new addition. Lab Rescue asked this afternoon if I'd take an 8 year old boy named Cooper that needed to be moved from his foster home TODAY. Of course I say yes, and he was dropped off at my office as I was leaving work.

I don't know much about Cooper. Other than he was given up by his elderly owners who could no longer care for him, and he came into the rescue about 2 weeks ago. However, Cooper apparently isn't sleeping at night, and this was becoming a problem and causing some frustration and so the Foster Home ask that he be moved.

We've not done any one on one intros. But Cooper doesn't seemed bothered by the dogs passing by him in an ex-pen and vice-versa. I was told by his foster home (who could not have been any nicer!) that he is easy going....except at night when he pants and paces and whines and won't settle down. I wonder if he has sundowners syndrome?

Well, lets welcome Cooper and see how it goes. 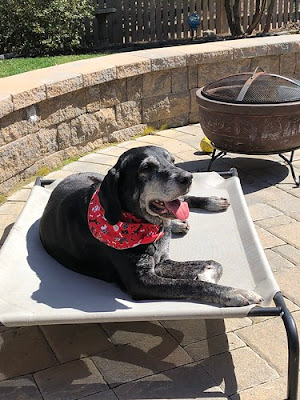